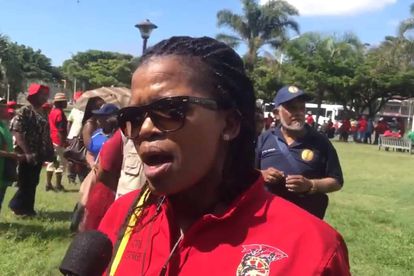 The Congress of South African Trade Unions’ (COSATU) President Zingiswa Losi says the chaos that erupted when President Cyril Ramaphosa addressed a May Day rally was bound to happen.

Ramaphosa was forced to leave COSATU’s Worker’s Day rally in the North West on Sunday, 1 May 2022, after angry workers stormed the stage at the Royal Bafokeng Stage.

According to several reports, the workers are believed to be from Sibanye Stillwater’s operations and had been striking for months as they have not been happy with government’s failure to address some of their grievances and demands.

Speaking to journalists after the incident, Losi said COSATU had previously warned the ANC in the build up to the 2021 local government elections that workers were getting tired of the governing party’s empty promises.

She said while she is leading COSATU, she isn’t under its employ and is in fact also a worker else and fully understands their complaints.

“I understand exactly what workers are going through. As the president of Cosatu, I’m not employed by the federation. I have my own workplace where I understand the day-to-day challenges workers are faced with,” Losi said.

She added that now COSATU needs to reflect on what happened and understand why workers are so angry.

“What we saw today is inevitable. Perhaps it is good that it happened because other things could be hidden from us, from other leaders. So what we saw are real issues that members are dealing with in the workplace, which calls for COSATU as a federation that is hosting May Day, to go back to its CEC and say, ‘What is wrong? What has happened? What is it that we have done wrong?'”