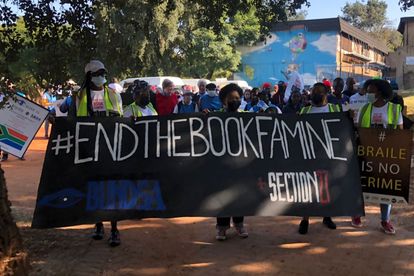 Judgement is reserved in the Constitutional Court case between non-profit organisation Blind SA against the government over the apartheid-era Copyright Act. Public interest law centre Section27 is the legal team for the NPO. The landmark judgement could start a new chapter in the country’s democracy, one that would be more inclusive.

Over 200 activists, including blind and visually impaired individuals, marched from Pieter Roos Park up to the Constitutional Court in Johannesburg on Thursday ahead of the case appearing in court.

The Copyright Act of 1978 is described as unconstitutional by activists of Blind SA and Section27. This is because of the barriers it creates for people who are blind or visually impaired who hope to convert books into formats like Braille.

In its current form, the Copyright Act states the changing or adaptation of a copyrighted work may amount to copyright infringement which is a criminal offence.

However, there is “leniency” to the Copyright Act where permission is not required for copyrighted work for the use of private studies, reviews or news articles.

Meanwhile, the visually impaired and blind are offered no such exception. These individuals have to personally track down each copyright owner and make requests to convert the work into accessible mediums like Braille.

The requests, if answered, can take extended periods of time resulting in the visually impaired either having to make alternatives which can be costly or pause their tasks like studying.

Activists from the NPO such as Ntshavheni Netshituni the president of Blind SA, its chief executive Jace Nair and Thandile Butana, Blind SA’s developmental officer, have described the violations as a book famine.

Learners, teachers and students who hope to convert textbooks and other learning support materials are met by threats of fines, jail time or lawsuits for simply trying to read.

A visually impaired or blind parent is legally unable to read their children a bedtime story without first making an application with a copyright holder.

Section27 and Blind SA argue the book famine has continued to intensify feelings of ostracisation and inequality across the country since 1978.

As a result, Blind SA believes only around 0.5% of all published works in South Africa are available in accessible formats thus creating the book famine.

HIGH COURT ALREADY RULES LAW AS UNCONSTITUTIONAL FOR THE BLIND

In September 2021, Blind SA and Section27 brought a case before the Gauteng High Court where Judge Mandla Mbongwe found the Copyright Act unconstitutional.

Mbongwe highlighted the rights to equality, dignity, basic and further education, freedom of expression, language and participation in the cultural life of one’s choice as being violated.

Section27 representatives say the next step in changing the country’s law is to promote the rights of persons who are blind or visually impaired which can only be actualised by the Constitutional Court.