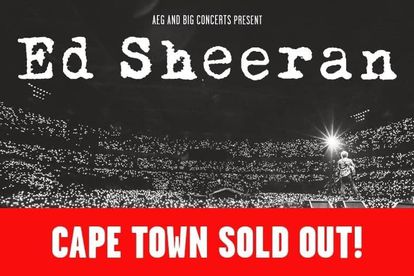 Ed Sheeran is coming to South Africa and it seems that the news has driven even more South Africans crazy than expected. With a 2nd show added in Jozi and Computicket causing chaos in Cape Town, we have all the latest.

Ed Sheeran South Africa: A bit of a ticketing nightmare so far?

On Thursday morning at 9:00, tickets for Sheeran’s show at Cape Town Stadium went on sale. Within just a few minutes, the digital queue of people waiting for tickets brought Computicket to a standstill.

Tickets were placed on hold as technicians worked on the problem. The ticketing service promised that sales would be back on by 10:30

Attention Ed Sheeran Fans:
Public tickets have been placed on hold due technical difficulties . We will advise as soon as the problem has been resolved. pic.twitter.com/ZDg6RMqAWs

At exactly 10:03, Computicket announced that sales had reopened. While people clearly managed to get tickets, others were left confused as Computicket began showing that the Cape Town show was sold out.

Sadly, that wasn’t an error. The Cape Town show is completely sold out. If you had hope of a second date being added in the Mother City, we have bad news.

In a response to a query from Cape Talk, Computicket confirmed that there will only be one Cape Town show (27 March 2019).

A new show added in Joburg?

Yes, while Cape Town get’s the short end of the stick,  FNB Stadium will see two nights of Ed Sheeran. Due to the huge demand, Big Concerts and Sheeran’s team have agreed to put on a second show.

Tickets for both of those shows will be on sale from Friday morning at 9:00. While Computicket has promised that they are doing everything to ready the site for the mass demand, don’t be surprised if there is a crash or two.

We wish you all the best of luck!

Big Concerts has already stressed that tickets will ONLY be available on Computicket and will not be transferable.