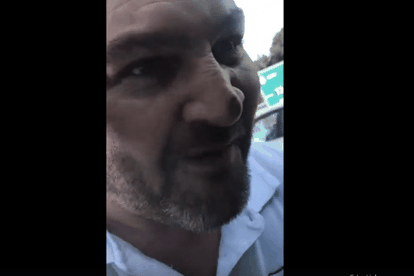 The Porsche driver squares up to the elderly motorist

The Porsche driver squares up to the elderly motorist

What a difference a day makes: One minute, you’re throwing your weight about to terrify a pensioner. The next, you are all over the news and find yourself suspended from work for smashing his car up in a fit of road rage.

That is the fate which has befallen Lance O’Leary, following a road rage incident in Johannesburg last month. The video footage emerged of Porsche driver O’Leary terrorising Christopher Price, 71, in his Range Rover following a minor collision.

When they both pulled in to the relative safety of a nearby Caltex garage, Price believed they would exchange insurance details. However, the only thing O’Leary exchange was a series of blows to the old man’s vehicle.

He kicked, punched and smashed up various parts of the Range Rover, and threatened serious physical harm to Price whilst trying to gain access into the car itself.

Thankfully, Price escaped unharmed from both the collision and his confrontation. As the CCTV footage went viral, it meant there was a very hefty price to pay for the hot-headed O’Leary…

Southern African Auto Supplies have confirmed that Mr O’Leary has been suspended from his position as company Managing Director. His attention has since turned to legal action however, as he fights to clear his name.

What did O’Leary say in his defence?

In Mr O’Leary’s version of events (speaking to News24 via a communications firm), he lamented Price’s reckless driving. He claims that Price forced him off the road and intentionally drove into his stationary vehicle, causing damages of R100,000:

“He fled the scene of the accident. I was forced to chase after him. I am in no way trying to justify or sanction my actions – merely provide a context to the circumstances that lead to the event in question. I’ve never reacted like this before and it’s not typical behaviour.”

Two sides to the story?

The ex-Managing Director says he has opened perjury, defeating the ends of justice and incitement to public violence charges against Price, whereas Price himself has opened a case of assault following the August 30 incident on London Road, Johannesburg.

In response to that statement, Christopher Price’s daughter retorted by claiming her father ‘would be eating out of a straw now’ if the Porsche driver had managed to get to him.

He’s had his trial-by-internet. Now O’Leary must face a legal battle in the courts.