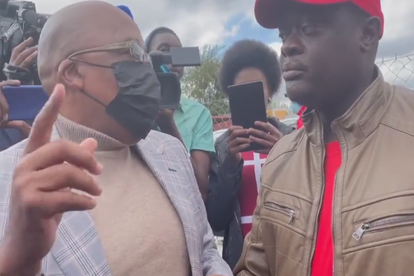 Following a fractious week in the Gauteng settlement of Diepsloot, Aaron Motsoaledi made an eventful appearance to address the community on Friday. The Home Affairs minister ended up taking a Zimbabwean man outside with him, before calmly asking the foreign national ‘to leave in peace’.

The extraordinary moment appears to have temporarily defused tensions that have been boiling over for days. Elvis Nyati, a Zimbabwean-born resident of Diepsloot, was set alight and murdered in a mob justice attack on Tuesday night. The group demanded to see his passport, and allegedly killed him for being ‘undocumented’.

With the community on a knife-edge, intervention was desperately needed. A heavy law enforcement presence and the return of Bheki Cele has put locals on high alert, and Aaron Motsoaledi was also given the call.

Aaron Motsoaledi is our only minister in South Africa.????♥️????????#VoetsekSAMedia pic.twitter.com/JVGPF7JKzY

It’s understood the Zimbabwean in question entered the hall alongside scores of South African nationals. His presence was noted by those in the crowd, and before things could get properly heated, Motsoaledi escorted him outside. The minister then politely asked the attendee to leave the scene.

“This is a community meeting of people who stay here only… We ask you to leave because this is a meeting of the community. Now were are unable to continue with the meeting because they are very angry. I’m just asking you to leave peacefully. Tell whoever invited you, that you are at the wrong meeting.”

“You lost a Zimbabwean which is really sad, but this lot have lost seven people. That’s where their anger is, and we have to solve this with the community in a way that is understandable. You need to relax, and leave here.”