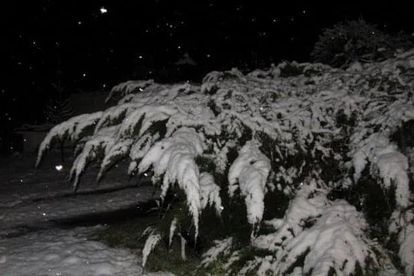 As South Africa does it’s best to survive the almost-nuclear winter we are having, today would be as good a day as any to bring your duvet to work.

The snow has found its way to our plains on the back of a country-wide cold front, and it isn’t just the moutainous regions that are enjoying a flurry: Parts of KZN, Eastern Cape and Free State are being covered by a wonderful white dusting.

The South African Weather Service have warned that snowfall in all three of the aforementioned areas will be disruptive, and advised motorists to take extra care on the roads:

Winter woke up with a point to prove this morning. Temperatures plummeted overnight, with Johannesburg recording a baltic one-degree reading earlier on. The forecast is great news for people who like wearing layers…

South Africa’s budding photographers were on hand to capture the best of the scenes from this morning, as more snowfall is predicted the mid-to-east regions. Stay safe, stay warm, and stay as near to a heater as possible.

Good Morning from a snowy and cold Sutherland! https://t.co/o2YthsXnz1 pic.twitter.com/8ijXd2CRr3

#ColdFront KZN Emergency Services say they are expecting snow in parts of the province.