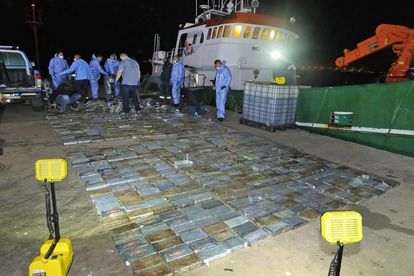 Cocaine worth an estimated R538 million was seized during a late night operation carried out by police on Monday 1 March. Photo: SAPS

Cocaine worth an estimated R538 million was seized during a late night operation carried out by police on Monday 1 March. Photo: SAPS

A shipment of cocaine was intercepted late on Monday night off the coast of Saldahna in the Western Cape, with 10 suspects taken into custody as police raided a fishing vessel and found an enormous supply worth an estimated R538 million.

The bust has been hailed as a major step in the right direction for law enforcement agencies in their mission to make ground on those engaging in illegal drug-related activities.

“The intelligence-driven, evening operation saw various tactical forces descending on the vessel where 973 blocks of compressed cocaine (estimated at R583 million) were found in three compartments of the vessel,” she said.

Four Bulgarian nationals and six suspects from Myanmar were among the arrests made during the operation, and the men have been charged with a host of drug related offences.

“Ten suspects were subsequently arrested on charges of dealing in drugs. They are expected to appear in court in Vredenburg soon.”

Potelwa said that further investigations into the drug smuggling operation will continue as the detectives “determine the origins as well as the intended destination of the consignment”.

“SAPS management has hailed the find as a step in the right direction in efforts to deal with the illicit drug trade,” she said.

In 2019, a cocaine bust valued at approximately R720 million was made in the Eastern Cape, with the latest bust the nearest in size to that seizure.

Another Eskom truck driver and his supervisor arrested for coal theft