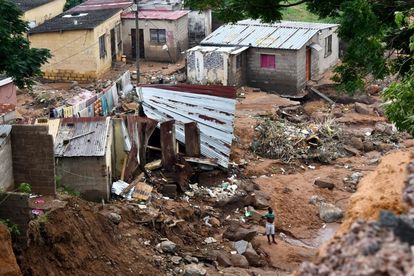 The devastating floods that hit KZN and the Eastern Cape were made twice as likely by the rising average temperature around the globe. Photo: GCIS / Flickr

The devastating floods that hit KZN and the Eastern Cape were made twice as likely by the rising average temperature around the globe. Photo: GCIS / Flickr

On Friday, 13 May, scientists revealed that caused the floods and landslides in KZN were made twice as likely by global warming. Over two days, KZN faced an exceptional downpour of more than 35 centimetres.

The horrific flooding between 11 and 12 April claimed more than 440 lives and caused billions of rands in damage across KwaZulu-Natal and the Eastern Cape. Scientists revealed that without climate change, rain of this magnitude would only happen once every 40 years.

The report comes from the World Weather Attribution Consortium which is a global network of scientists that calculate the effect of global warming on extreme, individual weather events.

An increase in the planet’s average surface temperature has divided the 40-year interval in half.

“The probability of an event such as the rainfall that resulted in this disaster has approximately doubled due to human-induced climate change,”

the scientists said in a statement.

The scientists revealed that the same can be said for droughts, wildfires, heatwaves and tropical cyclones. Current greenhouse gas reduction commitments can see temperatures increase far more than the target capping of 1.5°C that many nations have embraced.

The floods impacted those in rural areas most

The lead author of the South Africa assessment Friederike Otto said the devastation was not just caused by rainfall intensity but also the exposure of human populations.

The scientist revealed that a large amount of those who lost their lives to the floods resided in informal settlements. He explained that climate change impacts the people who are most vulnerable, reports EWN.

“Most people who died in the floods lived in informal settlements. So, again, we are seeing how climate change disproportionately impacts the most vulnerable people,”