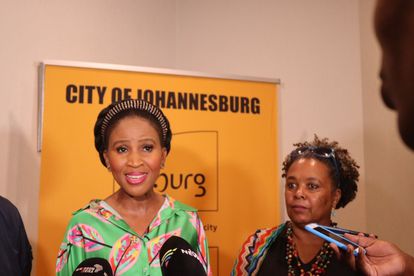 It hasn’t even been a week since the Democratic Alliance’s (DA) Mpho Phalatse was given the greenlight to return to office as the City of Johannesburg Executive Mayor and the African National Congress (ANC) is gearing up to table another motion of no confidence in her.

Phalatse was ousted as Mayor earlier in September and the ANC’s Dada Morero took over. Phalatse then challenged the matter in court which eventually ruled that her removal was unlawful.

WILL PHALATSE SURVIVE ANOTHER MOTION?

Dada Morero who was voted Mayor following Phalatse’s ousting said they are planning another motion of no confidence in Phalatse and the motion will be part of the agenda in the Council’s Programming Committee meeting that is expected to be held on Friday, 28 October.

In the judgement, Judge Raylene Keightley said she found that the Speaker of Council Colleen Makhubele was not lawfully permitted to treat DA Councillors as if they had no right to participate in the Council meeting because they had refused to sign the register.

“It follows that she also acted unlawfully in treating the motion as being unopposed. Her conclusion that it was unopposed, and hence to refuse to permit any debate on the motion, was fatally tainted with illegality through her unlawful refusal to permit DA Councillors to participate in the proceedings of the Council,” she said.

The news of a new motion of no confidence against Phalatse come as City of Ekurhuleni Executive Mayor Tania Campbell was also ousted this week the same way Phalatse was.

According to reports, this is also paving way for an ANC Mayor to take over the Metro Municipality.

While things have been heating up in the City of Johannesburg and Ekurhuleni it is not yet clear if the City of Tshwane Executive Mayor, Randall Williams will also face a motion of no confidence given that the Metro is also governed through a DA-led multiparty government.

ALSO READ: Mpho Phalatse: There’s no disconnect between me and the DA