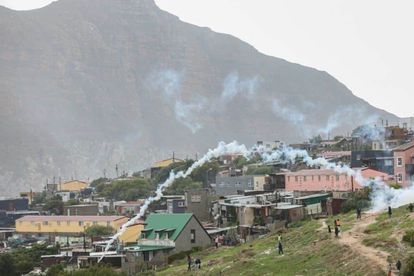 The City of Cape Town has been taken to task by the Western Cape High Court for their “deplorable” eviction of Hangberg residents, in which an occupied structure was torn down in the middle of a brutal cold front that hammered the coastal town earlier in June.

In the ruling handed down on Wednesday 15 July, Judge Gayaat Salie-Hlophe condemned the City’s behaviour, calling their actions “deplorable and grotesque” and accused them of acting “without care for human dignity”.

The City’s law enforcement tore down Ginola Phillips’ home in July, and an angry response from members of the seaside community prompted severe action on behalf of responding officers, who fired rubber bullets and deployed tear gas canisters to disperse the crowd of protesters that formed.

The complaint against the City was brought by a group of Hangberg residents, who claimed that the City were acting illegally in enforcing evictions during the nationwide lockdown.

The judge has ordered the city to rebuild Phillips’ structure with similar materials within 48 hours.

Speaking to EWN, the lawyer representing the Hangberg residents in the complaint, Vernon Seymour, said that the assessment conveyed by Judge Hlophe was vehemently opposed to the City’s manner of conducting the operation to remove the resident.

“She used the word ‘deplorable’,” he said.

“She’s found their [the city of Cape Town] actions was firstly unlawful and unconstitutional. Secondly, she declared that their actions are in violation of the lockdown regulations.”

City of Cape Town Executive Mayor, Dan Plato conveyed his disappointment in the ruling, lamenting the fact that the City would have to use up it’s precious time rebuilding the home of the evicted man.

“It is with disappointment that I note the judgment handed down today by Judge Gayaat Salie Hlophe, in which an illegally erected structure on city owned land was ordered to be rebuilt,” he said.

“The rebuilding of this illegally erected structure halts the planned development of the site for a recreational facility that would have included a five-a-side soccer pitch for use by the local community and youth in the area.”

Plato said that the City had offered alternative sites for the man’s home to be built on, but said that Hlophe insisted on ordering it to be rebuilt on the exact space that it existed before it was ripped to shreds during the severe storm.

“Despite the City offering two alternative sites for the structure to be built, and making it clear that notice had been given at the time not to erect the illegal structure, the judge still ruled in favour of the occupant of the illegally erected structure,” he said.

“This ruling was made despite the judge challenging the applicants yesterday on why they did not accept the alternatives offered.”

He said that he accepted the ruling and said that the City is considering its options regarding the judgment, as well as the valuable community facility which he said “has now been placed in jeopardy”.

This is by no means the first time that the City has been accused of acting with a lack of empathy or compassion for the impoverished masses living in the metro.

Shortly after the incident in Hangberg, the nation was enraged when video emerged of law enforcement officers severely manhandling a naked man who was being removed from his dwelling in the Khayelitsha informal settlement.

The City was also widely criticised for its treatment of Cape Town’s homeless community in the early stages of the lockdown. Accused of being severely under-provisioned, the camp was hurriedly erected in the notoriously cold veld in Strandfontein – which is situated a relatively far distance outside of the City Centre – and there again charges of heartlessness for the plight of the poor was levelled against them.

The City have said that the matter is more nuanced than this though, and said that constructing a narrative that portrays them as a heartless institution, in addition to the “concerning” precedent set by the court that they fear will permit land invaders to act with impunity, is a dangerous game to play.

““We believe we have a duty to protect our land,” said Plato on Tuesday 14 July.

“We follow due procedure; we believe we act within the confinements of the Constitution of the country. The land invaders, with the NGOs supporting them, do not understand the role the city in that regard and they believe that the city is acting illegally by breaking down structures.”

Regarding the Khayelitsha incident, Plato suggested that the man had removed his clothes and behaved dramatically to “put on a show” that would portray the City in a bad light. The City is currently being taken to task on that matter by the South African Human Rights Commission.

“I am of the opinion that it was deliberately done to portray the City of Cape Town in a very bad light,” he said following the surge of outrage that followed the incident.

The City insist that they are acting within their legal remit to eject “invaders” of municipal land, and said that what they have done in Hangberg and Khayelitsha does not constitute an eviction, but is better classified as an anti-land invasion operation.

The matter is currently being investigated by the Independent Police Investigative Directorate (Ipid), with four of the officers involved having been swiftly suspended.