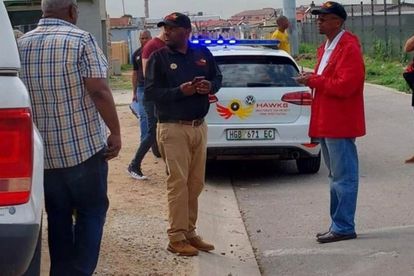 The Nelson Mandela Bay Metropolitan Municipality’s (NMBMM) top executives, former councillors and a businessman are involved in a fraud and money laundering case. It seems some of these funds led to the bribing of councillors to aid in ousting ANC mayor Eugene Johnson.

This included the city manager, 57, former director of Human Settlements at the municipality, 60, a businessman and his wife aged 41 and 36 respectively. The other suspects include a regional secretary, 29, and three former councillors aged between 42 and 61, said the Hawks spokesperson Captain Yolisa Mgolodela.

“The suspects were arrested on allegations of fraud, money laundering and contravention of the Municipal Finance Management Act (MFMA).”

HAWKS HAVE BEEN PROBING THE FRAUD SUSPECTS SINCE 2020

The arrest of the top municipal officials came after a complaint was lodged with the Hawks in April 2020. This complaint is related to the irregular awarding of a tender for the construction of flushing toilets in the municipality.

The toilets were meant for destitute families in order to contain the spread of Covid-19 during the lockdown, Mgolodela said.

“It is further alleged that at the time, the municipality did not have funds or budget for the project. Funds are reported to have been taken from other cost centres through the influence of the former acting executive director for Human Settlement,” she said.

A fraud case was then investigated which revealed a web of money laundering and corruption.

THE HAWKS TRACE THE ALLEGED FRAUDSTERS – LINKED TO OUSTING MAYOR

By analysing bank accounts, it was found that a transaction of R400 000 took place between the company that won the tender and another company. The latter company was however not declared as a subcontractor, Mgolodela said.

“The funds were then transferred to another bank account linked to a private business person.”

On further following up on the funds, it was established that R300 000 was paid to the regional secretary. The regional secretary in turn paid three former councillors as appreciation for casting votes of no confidence against one of their own, and then the mayor Johnson.

“The investigation was finalised hence the arrest of the eight.”

The eight appeared before the Gqeberha New Law Magistrate’s Court on Friday.

The suspects are listed as:

“They were released by the Gqeberha New Law Magistrate’s Court on R5 000 bail each. The matter is remanded to 31 October 2022 and is transferred to the Gqeberha Specialised Commercial Crimes Court,” Mgolodela said.