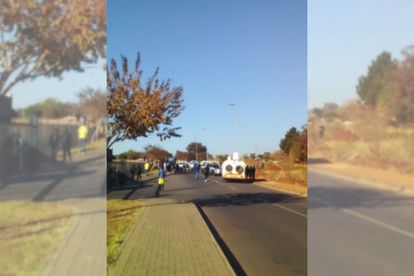 A cash-in-transit (CIT) robbery at a mall in Centurion and a gunfight thereafter has left one suspect dead and others injured. Videos of the scene have since been making the rounds on social media.

At 8:46 on Thursday morning 1 July, Netcare 911 said it responded to a shooting at a shopping mall off the R55 in Centurion, Pretoria. Reports indicate that a gunfight had broken out following a CIT robbery in the area.

A cash-in-transit officer had sustained moderate injuries after being shot in the leg.

“The guard was treated on scene and once stabilised was transported to the hospital for further care,” it added.

Police Colonel Athlenda Mathe commented on the CIT robbery and said two security officials were collecting money at the Mall@55 when they were accosted by four men.

“One security official was wounded in the process. Other security officials gave chase, police back-up was also activated and a shootout ensued which led to one suspect being fatally wounded, another suspect was also wounded and taken to a nearby hospital under police guard,” said Mathe.

Mathe said police in Gauteng have launched a manhunt for two other suspects since the CIT robbery at the mall in Centurion.

“Police have also recovered two money boxes that were stolen by the suspects, as well as two firearms that were used in the commission of the crime,” said Mathe.

No traffic was affected because the actual crime scene was at the mall and no bystanders were hurt.