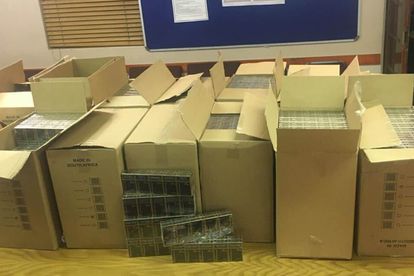 Wester Cape Metro Police have been busy busting a variety of crimes over the last 24-hours, bringing a number of suspects to book over lockdown violations and other crimes.

A R750 000 cigarette stash was confiscated in Bellville after police noticed a group of people arguing behind a delivery truck late in the evening.

No arrests made in cigarette bust

Metro Police spokesperson Ruth Solomons said that none of the members of the squabbling group were arrested because none of them claimed ownership of the 15 boxes of cigarettes or the vehicle they were being transported in.

They had fled into a nearby premises when officers rolled in to investigate, but were quickly apprehended.

“Officers were on patrol in the area at around 21:00 last night, when they noticed a commotion behind a white light delivery vehicle in Durban Road.”

“When they stopped to investigate, the group ran inside a nearby premises,” she said. “Officers found 15 boxes of Richman cigarettes in the back of the vehicle.”

“None of the persons wanted to claim ownership of the cigarettes or the vehicle, so officers confiscated the cigarettes and booked it in at Bellville SAPS as abandoned.”

Metro police also arrested a 24-year-old man after a tip-off led to the discovery of a 9mm pistol with shaved off serial number in his possession.

“In Bishop Lavis, officers arrested a 24-year-old man for the illegal possession of a firearm, after receiving a tip off from the community,” said Solomons.

“They confiscated a 9mm Z88 pistol, with serial number filed off and 12 rounds of ammunition.”

She also said that three suspects had been arrested on suspicion of stealing a vehicle in Langa.

“Members attached to the K9 Unit stopped a white Toyota Corolla at a roadblock on the N2 near Khayelitsha.”

“The driver couldn’t produce a driver’s license or a reason for being on the road.”

“When officers checked the registration number against the disc on the vehicle, they found it didn’t match, and it soon emerged that the vehicle had been reported stolen in a hijacking in Langa.”