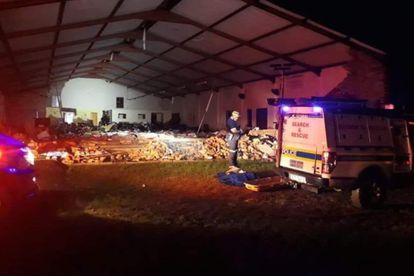 The roof of a church collapsed during mass near the eastern South African city of Durban, killing 13 people and injuring at least 16, officials said Friday.

The accident happened on Thursday evening in the town of Dlangubo, north of Durban, after heavy rains.

“The roof of the building collapsed because of heavy rains last night … at this point we have a total of 13 fatalities,” said Lennox Mabaso, spokesman for the provincial traditional affairs department.

Disaster management teams have been dispatched and investigations are currently underway into what caused the collapse. However, early reports suggest that the roof collapsed under persistent heavy rains.

KwaZulu-Natal has been battered by severe storms. IPSS Medical Rescue teams told local media that they worked for hours on Thursday as roofs of restaurants and even some houses were blown off during the storms in the Ballito area.

Residents were left no electricity, as well as houses and other establishments flooded and personal belongings found up to 200m away from there residence, due to the strong winds.

The organisation also shared photos on its Facebook page of the destruction left by the storm.