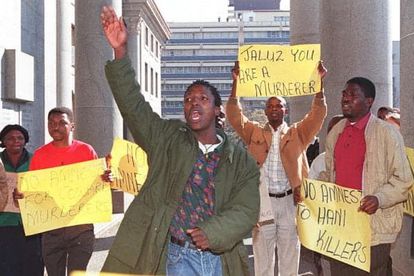 Justice Minister Michael Masutha had previously blocked a parole board decision to release Walus, which led to his legal challenge in the Pretoria court that have now granted the motion to free him.

Janusz Walus, a Polish immigrant, was serving a life-sentence for the murder he committed in 1993.

Hani, a charismatic activist and politician who was both a senior member of the African National Congress (ANC) and the head of the South African Communist Party (SACP) when he was gunned down.

At the time, the murder threatened South Africa’s transition into democracy, triggering nation-wide riots and fears of a looming civil war.

His lawyer, Roelof du Plessis, told News24 that his client had been giving parole.

Walus was sentenced alongside Clive Derby-Lewis, a right-wing politician who provided the murder weapon. Both were sentenced to death, but that changed when South Africa abolished the death penalty in 1995.