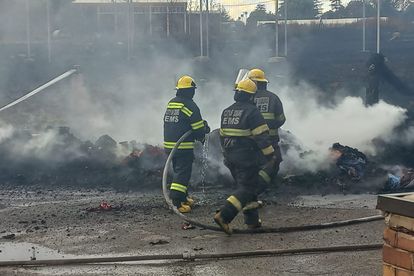 The Gauteng Department of Health confirmed that a fire broke out at Chris Hani Baragwanath Academic Hospital on Wednesday, 22 June.

According to the department, the fire started in an open space near the COVID-19 tents at the hospital.

Strong winds reportedly led to the fire spreading to the laundry site where it damaged a part of the condemned linen disposal process.

“The City of Joburg Fire services from Dobsonville and Jabulani arrived on time before the fire could spread to usable linen area and the building. There were no casualties due to the fire,” said the provincial department of health.

The department offered no for the cause of the fire.

Almost exactly a year ago, an office and a room of the hospital were damaged by a fire that started in one of the back offices near the laundry area.

“The office included a small laundry storeroom, used to store laundry which a portion was unfortunately burnt. No system and laundry machines were affected by the fire, and no one got injured,” said the department on that occasion.

At the time, it was believed that the blaze was caused by a heater but further investigations were meant to be conducted, according to SABC News.