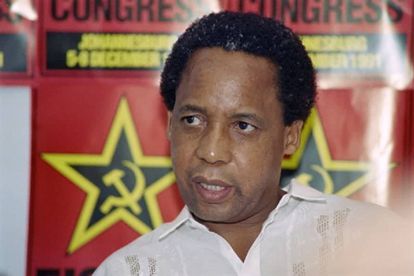 It’s been 25 years since Chris Hani was assassinated, in a crime which threatened to throw South Africa into a critical abyss.

Had it not been for the diplomacy of Nelson Mandela, Hani’s murder could’ve kept the country divided for years to come. Madiba’s plea for calm – delivered very presidentially before he rose to power – did enough to keep the path to democracy clear.

Chris Hani is a legendary figure in the fight against apartheid. So it’s only fitting we remember him on a day like today. It’s a crying shame he wasn’t alive for SA’s first democratic elections, but he played a huge part in delivering them. Here’s everything you need to know about one of the greats:

Perhaps the first thing we need to know about Chris Hani is the fact that he’s not actually called Chris. He was born Martin Thembisile Hani in 1942 but changed his name due to the fact he was a highly-wanted man in the eyes of the apartheid regime.

He spent his formative years in tertiary education at Fort Hare University, before going on to graduate at Rhodes in Grahamstown, Eastern Cape. He completed three years of study with a BA degree in Latin and English.

Hani was converted to communism at university

Hani identified as a Marxist and was drawn to the communist ideology from a very young age. He has previously credited his stay at Fort Hare as being the time he first rejected the “racist nature of the capitalist system”, learning more about politics as he continued to study.

His rise through party ranks was spectacular

He joined the South African Communist Party (SACP) in 1961, and then became a member of the ANC’s armed wing Umkontho We Sizwe one year later. This would be the start of a tumultuous, yet utterly dazzling political career.

He fought in the Rhodesian bush war, rising to the rank of Political Commissar in the Zimbabwe People’s Revolutionary Army (ZIPRA). His strategic knowledge of military operation eventually propelled him to the leadership of Umkontho.

In 1983, he was elected to the membership of the ANC National Executive Committee. Seven years later, he returned home to Mzansi when the ANC were “unbanned” in the country.

Following his father’s footsteps… to Lesotho

Chris’ dad was forced to leave South Africa whilst he was still growing up. Gilbert Hani was persecuted for being a member of the ANC and had to flee to Lesotho – a path his son would take decades later to seek his own refuge.

Hani became the leader of the SACP

In the early 1990s, Hani was hellbent on proving that communism could succeed in South Africa. This, despite its collapse across Eastern Europe. Such was his gift for public speaking, he was hailed for calming the tensions amongst those who were still seeking revenge for apartheid rule.

Regarded as a “younger Mandela“, Hani certainly had the common touch. His message saw his Communist Party record some brilliant poll numbers throughout 1992 and looked as if they could challenge the ANC for the first democratic elections.

Killed by an extremist

Hani was shot in cold blood by the extreme right-wing fanatic, Janusz Walus, when returning home to Dawn Park (Boksburg) on 10 April 1993. The Polish immigrant ended up embroiling a Conservative Party MP into the investigation too, as he used Clive Derby-Lewis’ gun to carry out Hani’s assassination.

Both men were given death sentences for the murder. However, their lives were spared by the grace of Nelson Mandela’s newly-elected government. They opted to remove the death penalty from South Africa’s constitution.

The greatest orator of the ANC?

We’ve mentioned it before, but Hani really was cut from the same cloth as Madiba. His sheer determination to fight against the apartheid regime rocked the National Party to their core. The foundations he laid eventually finished them off.

Hani will perhaps be remembered best for the way he was able to soothe tensions within the more radical elements of the ANC. His influence over the radical township self-defence groups that had parted from the party’s authority proved to be vital.

Even in death, the former SACP leader was making things happen. His murder prompted all parties to hammer out an election date in order to seize the political initiative. Truly, he was one of South Africa’s greatest liberation fighters.