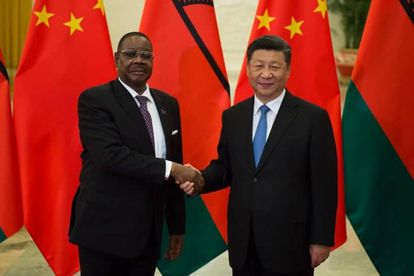 Malawi’s President Arthur Peter Mutharika (L) shakes hands with China’s President Xi Jinping (R) before their bilateral meeting at the Great Hall of the People in Beijing on September 1, 2018.
Mutharika is in China for the Forum on China-Africa Cooperation which will be held September 3-4 in Beijing. / AFP PHOTO / POOL

Malawi’s President Arthur Peter Mutharika (L) shakes hands with China’s President Xi Jinping (R) before their bilateral meeting at the Great Hall of the People in Beijing on September 1, 2018.
Mutharika is in China for the Forum on China-Africa Cooperation which will be held September 3-4 in Beijing. / AFP PHOTO / POOL

As African leaders attend this week’s summit in Beijing awash with investment pledges, back in Malawi, pupils are stuck into their Mandarin lessons — a clear sign of China’s increasing sway over the continent.

“The world now is going in such a way that if you want to travel, (you) should not want to find difficulties talking to people. Language can be a barrier,”

“I want to learn Chinese because if I get a chance of going to China maybe for business or for school then I wouldn’t find too many problems,”

Malawi and China have had diplomatic relations only since 2008.

But more than 1,000 Malawians now attend Chinese classes at 25 learning centres in four cities across Malawi, according to professor Feng Jianguo, director of the Confucius Institute in Lilongwe.

“We have a lot of Chinese enterprises offering opportunity of employment,” Jianguo said.

“If you know how to speak, how to read and write and you learn the Chinese language, it will be much easier for you to find a job.”

Last month, the Chinese embassy in Lilongwe announced it would provide 1,000 scholarships to Malawian students ranging from undergraduate to doctoral levels to study in China.

The programme is just part of China’s massive engagement with Africa in recent decades.

The world’s second-biggest economy has poured billions of dollars of loans and funding support for roads, ports and other major infrastructure projects.

From power plants in Botswana to diamond mines in Zimbabwe, railways in Nigeria and hydropower projects in the Democratic Republic of Congo, Africa has come to rely on China for investment and jobs.

Yvonnie Sundu, an arts reporter on Malawi’s Nation newspaper who recently returned from studies in China, said the country’s impact on Africa was increasingly evident.

“China is continuously offering options that were not previously available,” she said.

“When you thought of going for further studies, the ideal choice was the UK or USA. But now, China has opened up.”

Chinese President Xi Jinping told African leaders in Beijing on Monday that the country’s investments on the continent have “no political strings attached” as he pledged $60 billion in new development financing.

At the demanding Confucius Institute at the University of Malawi teacher Sung Goujua has some encouraging advice.

“If your pursuit is to become a professional translator, maybe it can be quite difficult,” he said. “But if you just want to learn basic communication, it is very easy — maybe two or three months would be enough.”