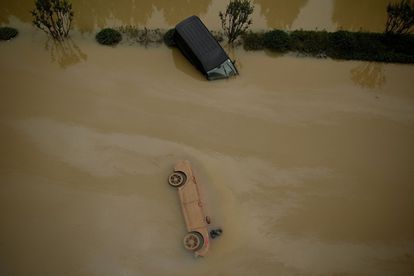 Severe flooding in China’s northern Shanxi province has affected 1.76 million people and led to the death of four police officers in a landslide the BBC reported on Monday.

The BBC reported that according to local Chinese media, torrential rain had lashed the province last week causing houses to collapse and leading to landslides in 70 districts and cities across the province.

According to the Chinese Xinhua news agency a total of more than 120,000 people had been urgently relocated after some 17,000 homes collapsed across the province during the latest floods in China.

“Four police officers have died as a result of a landslide, according to the state-run Global Times, although information about other casualties has not been released. It added that the Shanxi flooding may have been worse than the floods in Henan earlier this year,” the BBC reported.

Local officials reported that the ongoing heavy rainfall was hampering rescue efforts in the flooded region.

Taiyuan, the capital of Shanxi province recorded average rainfall of around 185.6mm last week. This is exceptionally high compared to the 25mm the city recorded October between 1981 and 2010.

Several ancient monuments located in the province are also now at risk of being destroyed due to the heavy rainfall and flooding.

Meanwhile, The Guardian reported that in the neighbouring Hebei province, a bus had crashed into a river in northern,  killing at least three people dead, and leaving 11 others missing after flooding from heavy rains destroyed homes and covered the farmland in the two provinces.

“A video shared online online showed people on top of an almost submerged bus in a rushing river flowing over a nearby bridge outside the city of Shijiazhuang, about 165 miles (265km) south-west of Beijing,” the Guardian reported on Monday.

According to the Chinese state broadcaster CCTV 37 of the 51 people on the bus had been rescued.