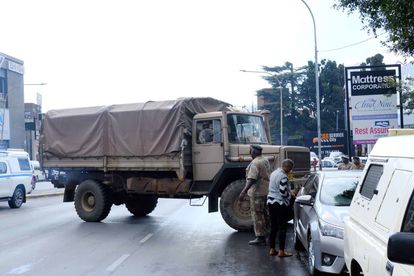 The South African National Defence Force (SANDF), which will play a key role in curtailing the spread of coronavirus across South Africa, will on Thursday receive “an essential donation” of medical protective gear from the People’s Republic of China’s armed forces.

“The SANDF chief of staff Lieutenant General Lindile Yam will receive a consignment of 2 000 protective eye goggles and 3 000 face and nose masks for utilisation by the various members of the SANDF directly involved in supporting government efforts during the state proclaimed 21-days lockdown of the country due to the COVID-19 pandemic,” the SANDF said in a statement.

The defence force said the masks and protective eye goggles will be distributed “according to prioritised requirement”.

An acceptance ceremony was due to be held on Thursday at the South African Military Health Services’ depot in Pretoria.

On Monday 23 March, president Cyril Ramaphosa announced a national lockdown to curtail the spread of COVID-19, with the deployment of the SANDF to support the police.

“I have accordingly directed the South African National Defence Force be deployed to support the South African Police Service in ensuring that the measures we are announcing are implemented,” Ramaphosa announced at the Union Buildings in Pretoria.

Last week, Chinese entities operating in South Africa donated at least R3 million towards the country’s fight against the virus.