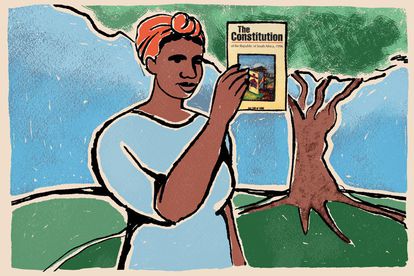 The Constitutional Court has ratified a High Court order declaring sections of the Drugs and Drug Trafficking Act as unconstitutional because it criminalises the use and possession of cannabis by a child. Illustration: Lisa Nel

The Constitutional Court has ratified a High Court order declaring sections of the Drugs and Drug Trafficking Act as unconstitutional because it criminalises the use and possession of cannabis by a child. Illustration: Lisa Nel

The Constitutional Court has ratified a High Court order declaring sections of the Drugs and Drug Trafficking Act as unconstitutional because it criminalises the use and possession of cannabis by a child.

The court has suspended the order for 24 months to give Parliament time to finalise a legislative reform process.

During this period, the court has unanimously ruled, no child may be arrested or prosecuted, or even “diverted” for contravening the relevant provisions of the Act.

Instead, the court said, any child apprehended may be referred to civil processes, such as those found in the Children’s Act.

Where a court has already convicted a child, the criminal record can, on application, be expunged.

The matter came before the court following an order by Johannesburg High Court judges Ingrid Opperman and Ratha Mokgoathleng in 2020, who found that criminal penalties should not be imposed on children when, following the Constitutional Court judgment Prince v Minister of Justice and Constitutional Development, the same was not true for adults.

The application was launched by the Centre for Child Law. It was ultimately not opposed by various government respondents, including the Director of Public Prosecutions, Johannesburg, and the ministers of Justice and Correctional Services, Social Development, Health, Basic Education and Police.

Judge Nonkosi Mhlantla, who penned the judgment on behalf of the court, said the case was not about condoning the use and possession of cannabis by a child and none of the parties had argued such.

“Rather this concerns the repercussions … in other words, the question to be answered is this: is the criminal justice system the appropriate mechanism to respond to the use or possession of cannabis by a child or are social systems designed to protect and promote the rights of the child more suitable?”

She said the Prince matter had legalised the use, possession and cultivation by an adult for private and personal consumption.

It had carved out a legal space for adults but the fact that it was not extended to children was not an oversight.

“It is implausible to claim that a child has a right to the personal consumption of cannabis in private. There are valid reasons to protect children from the use of drugs.”

“This matter is about the consequences of use/and or possession of cannabis by a child … Our focus in this matter is on decriminalisation not legalisation … It is about choosing the appropriate manner in which to respond to a child using or possessing cannabis.”

“A proper approach is to look at the best interests of the child principle,” the judge said.

ALSO READ: Medical cannabis use – is it allowed in the workplace in South Africa?

Judge Mhlantla said the parties before court had identified several adverse effects of criminalising the child’s conduct – including that the child would be exposed to the harsh consequences of the criminal justice system and obtain a criminal record which carried implications for future prospects and employment opportunities.

She said imposing criminal sanctions on a child exposed them to harm and risk and was inconsistent with a child-centred approach.

The state respondents had agreed that, even if the criminalisation could serve as a deterrent, it was not appropriate.

Judge Mhlantla said there were less restrictive and more appropriate measures to respond to a child apprehended for using or being in possession of cannabis.

A child could also be declared to be in need of care and protection, if he or she was addicted to a dependence producing substance and was without any support to obtain treatment.

Are there any consequences if a child uses cannabis?

Judge Mhlantla said she was cognisant of the fact that there was an inherent risk that decriminalisation could result in harm and therefore there was a need for a social response to the issue, centred on rehabilitation, support and recognising the inherent vulnerability of the child, outside of the criminal justice system.

“This judgment does not permit a child to use and possess cannabis without consequence,” she said, noting that it only applied to cannabis and not other substances.

“Nor do we decide any issue as to the criminal liability of children who might deal in cannabis or otherwise induce others to make use of it,”

“I deem it necessary to reaffirm that any adult who utilises or implores a child to be in possession of cannabis or to use cannabis can be held criminally liable.”