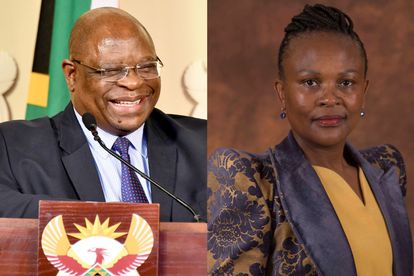 Zondo spoke out after Mkhwebane engaged with the media this week revealing her investigation into Abramjee’s SMS is completed.

During her investigation into Abramjee, Mkhwebane says she discovered cellphone records for numbers linked to Kollapen and Mlambo.

She has forwarded the findings of her investigation to both the Hawks and Judicial Service Commission.

Mkhwebane’s office conducted the preliminary investigation, out of its own initiative, in April when it was revealed that Abramjee sent an SMS to Parliament’s counsel, advocate Andrew Breitenbach SC, saying the public protector would lose the application.

An analysis of cellphone data showed 18 telephone calls between January and April between the number that sent the SMS to Breitenbach was made and the one registered to Kollapen.

On Thursday, the Chief Justice said his investigation into the allegations would be completed in the coming weeks with the findings being made public.

However, for now, Zondo revealed that shortly after the Abramjee Saga reared its head Kollapen disclosed that he knew Abramjee for years, lived in the same area and attended an event earlier this year.

Zondo says Mlambo also disclosed meeting Abramjee, although it was at the same event Kollapen attended in March this year. It was the first and last meeting between the two.

The event was hosted by the Pretoria Legacy Foundation and was in honour of Kollapen.

According to Zondo, neither Justice Kollapen nor Mlambo disclosed any confidential information about any court case.