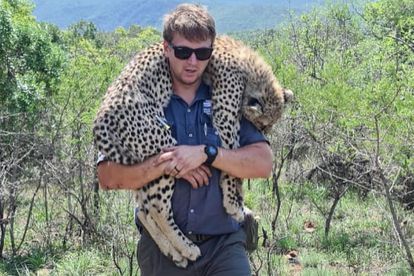 Two young cheetah cubs were rescued thanks to the brilliance of KwaZulu-Natal Wildlife rangers and a wildlife vet. Unfortunately, the cubs were left completely alone after their mother died while being trapped in a wire snare trap.

The mother died at the Ezemvelo KZN Wildlife reserve last week. Rangers discovered the body and noticed that her two 8-month old cheetah cubs were still nearby. A decision was immediately taken to capture the cubs as they would not be able to fend for themselves.

The rangers and veterinary team began the process by dragging a small impala carcass past the cubs. As they ran out, the first attempt to dart them was unsuccessful. The cubs then ran off into the bush.

This is where this story gets particularly impressive. One of the rangers known for his animal calls, was able to replicate the sound cheetahs use to call each other. As he did so, the cubs ran out towards him and were able to be successfully darted at the second attempt.

“The cheetahs were then carried up a long hill, being assessed and monitored along the way, until they reached the helicopter at the top.The cubs were loaded onto the backseat of the helicopter and were speedily flown to the boma by helicopter pilot Orton Bosman of Heligistix, where they were safely released.”

Cubs to be relocated

The two cubs are now set to be relocated to a new reserve that has experience with rehabilitating young cheetahs.

The African Wildlife Vets group is warning that snaring incidents like these are on the rise. In October, a wild dog was saved after rangers noticed his tracking colour had not moved. While the dog’s pack had moved on, he was stuck in a snare.

It’s not just snaring incidents that are now all too common. In December alone, four suspects have been arrested for rhino poaching. Around 24 rhinos have been killed in the country this month.