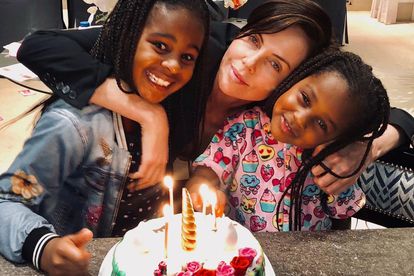 Charlize Theron offered the world a rare glimpse into her personal life on Tuesday, 3 August, when she shared a video clip of her daughters, Jackson and August. The trio is currently holidaying in Greece, which is reportedly where the clip was filmed.

CHARLIZE LEAPS INTO THE SEA WITH DAUGHTERS

Charlize, Jackson and August made quite a splash when they leapt from the side of a large boat into the blue water, hand in hand.

The Academy Award-winning actor captioned the slow-motion video, “Me and my girls 4 life” with a purple heart emoji. Famous friends like Reese Witherspoon commented, “EPIC!!” while comedian Chelsea Handler said, “Yeah, baby. Get it Love!”

It is the first time Charlize, a single mother, has posted Jackson, 9, and August, 5, since September 2020 when she cast the spotlight on them with a tribute on National Daughters Day. “My heart belongs to these two beautiful powerhouses. I will never be the same,” wrote Charlize about the girls she adopted in 2012 and 2015.

According to Greek City Times, Charlize was spotted in Paros on Tuesday. She left a yacht moored near Naoussa and headed to the Barborossa restaurant and enjoyed dinner and drinks with her friends and daughters.