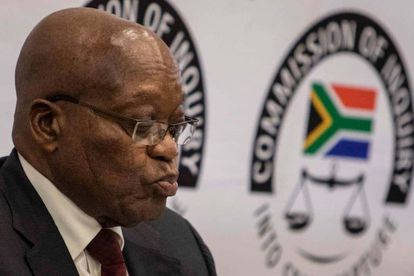 The police have reportedly written to the Constitutional Court saying they will not enact the order pending the outcome of legal challenges to the apex court’s ruling – unless the court directs them otherwise.

NO ACTION AGAINST ZUMA UNLESS TOLD OTHERWISE

In the letter – authored by a state attorney representing police minister Bheki Cele and police chief Gen Khehla Sitole – the pair said the police would “out of respect of the unfolding litigation”, hold their actions on the top court’s order to arrest the former president until Zuma’s litigation in the Constitutional Court is finalised — unless directed otherwise by the acting chief justice, Raymond Zondo.

The letter was reportedly attached to Zuma’s court papers in the Pietermaritzburg high court.

This is the court where his urgent application to stay the execution of his arrest is due to be heard on Tuesday.

According to BusinessLIVE the concluding paragraph of the letter reads:

“We trust you find the above in order and our clients [Cele and Sitole] will be bound by any direction which the honourable court may issue pursuant to our clients’ intention to hold any steps in abeyance as indicated herein.”

Zuma was sentenced to 15 months in prison last week. He was given a five-day deadline to hand himself over which expired on Sunday at midnight.

He applied for a stay of execution of the order for his arrest on Sunday following his conviction and sentencing to 15 months in jail for contempt of Court in the Constitutional court.

The Zondo Commission on Monday opposed Zuma’s application for a stay of execution of the order for his arrest that will be heard in the Pietermaritzburg High Court on Tuesday.

Zuma applied for a stay of execution of a Constitutional Court ruling that ordered Minister of Police Bheki Cele and Minister of Justice and Correctional Services Ronald Lamola to take necessary “legal steps” to ensure the former president commences his sentence within five days of the ruling.

Zondo Commissison Secretary Itumeleng Mosala said in court papers filed in the Pietermaritzburg High Court on Monday that the commission opposed Jacob’s application for an interdict to prevent his arrest for the following reasons:

He spoke to traditional headmen and some of his supporters at Nkandla, KwaZulu-Natal (KZN) on Saturday afternoon, 3 July 2021.

“I don’t know what wrong I have done, they never told me,” he said in isiZulu.

His supporters have vowed to prevent law enforcement officers from arresting him, by any means necessary.

ALSO READ: ‘I don’t know what I did wrong,’ Jacob Zuma tells supporters