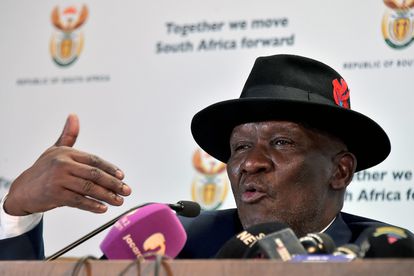 The Minister of Police Bheki Cele is not hiding his disappointment, in reacting to the arrests of law enforcement officers implicated in wrongdoing. The latest one being deputy national police commissioner Lieutenant General Bonang Mgwenya, who appeared in court in connection with a fishy R200 million to provide emergency warning equipment.

“It’s a situation that leaves you sad but it will leave you perplexed if the right thing is not done. We just wish that it continues going to court and (the court) tells us what happened. We are not about to stop, if it means that we continue (working with ) all other agencies that are supposed to deal with those matters,” Cele said at a media briefing on Monday, October 12, 2020, just hours after Mgwenya was handcuffed.

The top cop appeared before the Palm Ridge Magistrates Court in Johannesburg.

She was one of 13 suspects who were nabbed and is accused of bagging as much as R500 000 worth of kickbacks from the contract. Mgwenya was arrested in the early hours of the morning by the police.

Other co-accused in the matter include other senior police officials and Vimpie Manthatha, the sole director of a company called Instrumentation for Traffic Law enforcement (Pty) Ltd, which received the contract.

The Investigating Directorate says they face charges of corruption, fraud and money laundering. They are said to have influenced the awarding of the lucrative tender to the company, and in return, were given kickbacks.

“During the procurement process, the SAPS accused completely ignored the competitive bidding process and committed the SAPS to financial exposure of R191m in favour of Manthatha’s company in exchange for benefits they received from Manthatha,” said ID spokesperson Sindisiwe Thwala.

“Mgwenya today faces charges of corruption, fraud and money laundering for her role in ensuring the contract to supply emergency warning equipment for the South African Police Service (SAPS) in 2017 went to Instrumentation for Traffic Law enforcement (Pty) Ltd, while she enjoyed an undisclosed close relationship with the company’s owner, Manthata,” she said.

Manthatha is alleged to have forked out R440 000 which went towards the purchase of a luxury vehicle for Mgwenya, which has also been seized by the authorities.