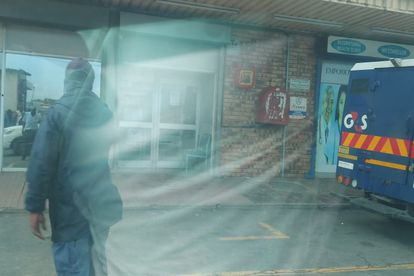 A G4S Security guard was shot twice during a cash in transit heist in Umlazi on Tuesday.

A G4S Security guard was shot twice during a cash in transit heist in Umlazi on Tuesday.

A video of what appears to be a cash-in-transit heist in Boksburg went viral on Tuesday just as news came in of a second attempted heist during which a G4S security guard was shot and airlifted to hospital.

The video, which is labelled as “another heist in Pretoria” appears to have been filmed by office workers who had a full view of the scene of the crime as the cash-in-transit heist unfolded. SAPS spokesperson Brenda Muridili, however, confirmed that the incident occurred in Atas Road and that suspects had bombed the vehicle to get their hands on the loot.

In the latest cash-in-transit heist in Umlazi, South of Durban, suspects held up a van as it was collecting cash.

A What’s App message posted by PT Alarms stated that one cash in transit security officer had been shot during the incident.

A source close to the scene said a Netcare 911 helicopter was dispatched to Umlazi to airlift the injured security officer to hospital.

Watch the video of the victim being airlifted here:

“The G4S was collecting money from one of the businesses and was approached by an unconfirmed number of suspects.  One of the security guards was shot in the stomach and the hand,” he said.

He said the security ink in the money boxes the guards had been transporting had activated during the incident and the suspects turned and fled the scene.

SAPS spokesperson Brenda Muridili said:  “It is reported that this morning just after 9:30am, a security officer offloading money box(es) from a cash van was shot on the hand by suspects.

“The suspects grabbed the money box and tried to flee but the driver of the cash van followed them, forcing the suspects to drop the money box while fleeing the scene. The injured security officer was taken to hospital, no money was taken.”

She said the Boksburg cash-in-transit heist had occurred in Atlas Road on Monday at around 9.30am

“It is reported that… a cash vehicle was rammed off the road by a green Mercedes Benz.   An Unknown number of suspects robbed the security guards of undisclosed amount of money after allegedly using explosives to bomb the amoured vehicle. They are said to have fled the scene in a white Mercedes Benz and a black Audi,” she said.

“Two security guards were taken to hospital for medical attention as they had sustained minor injuries.”

The police have appealed to anyone with information to call Crime Stop number 086 00 10111 or send tip-offs on MySAPS App.