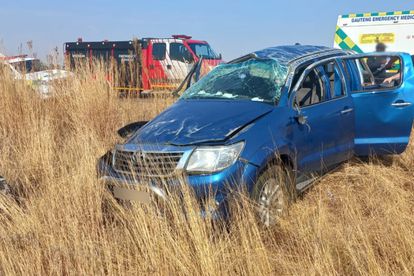 Six people were involved in a car crash near Carletonville on Thursday, 1 September. Photo: ER24.

Six people were involved in a car crash near Carletonville on Thursday, 1 September. Photo: ER24.

Six people were involved in a motor vehicle accident on the R500 outside Carletonville, Gauteng on Thursday morning, 1 September. Unfortunately, two of the vehicle occupants succumbed to their injuries.

A spokesperson for paramedic service ER24 said the accident occurred approximately 10 kilometres outside Carletonville. The vehicle allegedly rolled off the R500 road.

“ER24 paramedics arrived on the scene to find the Provincial EMS and another service already in attendance. Six patients were already extricated from the vehicle,” said ER24.

One patient was declared dead at the scene by the Provincial EMS as nothing could be done for them. Another patient was deemed to be in a critical condition while the others had sustained moderate to serious injuries.

All patients were treated at the scene and the critically injured individual was provided with advanced life support before being transported to nearby hospitals for further medical attention.

However, the critical patient died of their injuries upon arrival at the hospital.

“The local authorities were on the scene for further investigations,” said ER24.

In an unrelated incident, in KwaZulu-Natal, the N4 toll road was closed between Nkomazi Toll Plaza and Malelane on Monday after two trucks collided head-on.