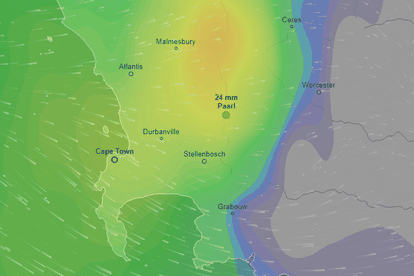 A generous helping of rainfall is making its way to the Mother City this week. In fact, the Cape Town weather forecast will have locals jumping for joy.

Although this week’s downpours aren’t exactly biblical (anyone currently building an ark is advised to down tools immediately), steady and frequent showers are set to last over a three-day period for the region.

The battle to halt day zero is far from over, but you can chalk this up as another “victory within the war” for the drought-stricken Cape. Here’s what you can expect to see in a wet – and most welcome – start to the week.

Cape Town weather forecast: When will it rain?

(All weather data is taken from ventusky.com)

We’ve got a light introduction to the rainfall on Monday. Around 15:00, the first spots of precipitation will make an appearance in Table View, before clouding over Cape Town approximately one hour later.

The rain intensifies across the whole CPT municipality throughout the night. It eventually eases off during the day, but follows a very similar pattern to Monday: Intermittent spots of rain will persist throughout the 24-hour period.

Betty’s Bay will have more than 10mm of rain in less than three hours as sunrise arrives. It’s going to be a wet and miserable commute for most Cape Town residents on Tuesday morning, but you won’t catch them complaining!

Into Wednesday and the rainfall again makes inroads during the early hours of the morning. This downpour is consistent if nothing else. After a few more showers, the skies will be clear around midday.

How much rain will Cape Town get?