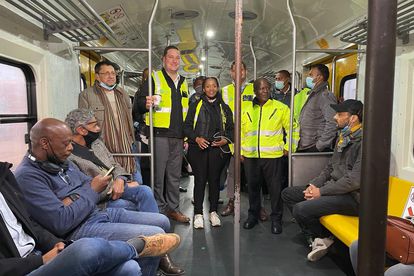 The City of Cape Town’s mayor Geordin Hill-Lewis revealed that the national treasury has given the go-ahead for a detailed feasibility study for the devolution of the rail function in the city to the metropolitan municipality, in a speech on Thursday, 28 April.

CITY OF CAPE TOWN GETS GREENLIGHT FOR FEASIBILITY STUDY

Hill-Lewis was speaking to the City council and added that the letter from Finance Minister Enoch Godongwana was a big deal because “up until now, the national government had tried to block the feasibility study.”

The Cape Town mayor added that Godongwana’s encouraging letter was significant as it endorsed the city’s intended policy direction, adding that projects such as taking over the railway system and ending load shedding locally take time and therefore it is essential that work starts immediately.

“We have already issued the tender and the work will begin as soon as the new financial year begins on 1 July this year.

“I do not think this first part of the project needs to take a long time and I know that our Mayoral Committee Member for Urban Mobility, Cllr Rob Quintas and his team will ensure not a second is wasted here.

“Let’s get it done as quickly as possible, so we can move on with getting the trains working,” said Hill-Lewis.

In February 2022, the Passenger Rail Agency of South Africa (PRASA) gave a presentation to the Western Cape Provincial Parliament Standing Committee on Transport and Public Works on the state of the rail service in the province.

The presentation reportedly revealed that PRASA ran 444 train trips on a weekday in Cape Town in June 2019 – this dropped to 270 trips before the COVID-19 pandemic hit our shores in early 2020 and currently sits at 153 trips per day in 20222.

The decrease represents a 66% reduction in the availability of service.

“It is my hope that Cape Town is given the space and the resources to show South Africa what good governance looks like.

“We will do this by collaborating with our colleagues in national and provincial government, and sharing knowledge and expertise with other cities,” said Hill-Lewis.