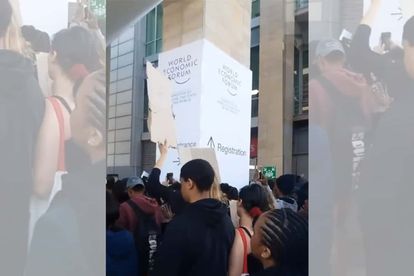 While the World Economic Forum (WEF Africa 2019) has kicked off without any hindrances at the Cape Town International Convention Centre (CTICC), on Wednesday, groups of protesters have gathered in different parts of the central business district to demonstrate their frustrations with the ongoing violence against women and children.

Am I Next: Why are women-led organisations protesting?

The demonstrations, led by the Total Shutdown and Am I Next movement, are a direct result of the frustrations felt by many South African women who have grown tired of the perceived inaction displayed by the government.

This week, South Africans learned that first-year UCT film student, Uyinene Mrwetyana was allegedly murdered by a Post Office employee. A six-year-old, Amy-Lee de Jager — thankfully she has been found and safely reunited with her family — was, on Monday, kidnapped in front of her school.

The country also recently heard of the gruesome murders of Leighandre Jegels, Nolunde Vumsindo, Meghan Cremer, Jesse Hess and others.

The apparent inability of law enforcement agencies and the government to nip the scourge of femicide and violence against women in the bud has prompted scores of women to band together for what they call “Am I Next” protests.

WEF Africa 2019: Where are the protests taking place?

It appears that there are two protests taking place simultaneously in Cape Town, on Wednesday. The Total Shutdown movement has, since this morning, held a protest outside the entrance of the CTICC where the WEF Africa 2019 is taking place.

There is also a march, led by the Am I Next movement, that is taking place along Plein Street. Scores of activists, women and children have turned out to picket outside Parliament, calling on the government to do more to protect women.

#WEFAfrica19: Ria , a Cape Town resident with #totalShutDown speaks to us about today as we march to Parliament. @dailymaverick pic.twitter.com/WguBkk3YQy

#WEFAfrica19: Shanice Appels, a 21 year old activist from Mitchell's Plain walked from the CTICC to Parliament. She explains why she got here.@dailymaverick pic.twitter.com/MYQ0vhrT99

The protests have not caused much traffic disruptions on Wednesday morning. However, an advisory has been issued of road closures in and around Parliament, due to the picketing event led by Am I Next protesters.

Motorists have been advised to use alternative routes when travelling in the area.