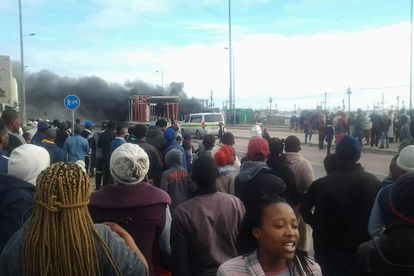 After a series of violent demonstrations over the weekend, protesters in Dunoon have again taken to the streets on Monday morning, causing havoc for those trying to negotiate the Cape Town traffic from the N7.

N7 protests in Dunoon – what is the cause?

There were unsavoury scenes on Sunday when enraged protesters – said to be dismayed by a spate of evictions in a Dunoon informal settlement – responded with fire and fury. A truck was set alight between Plattekloof and Potsdam Road, causing an overnight closure of the aforementioned highway on Saturday night.

The N7 between Plattekloof and Potsdam road at Dunoon has been reopened to traffic after it was closed overnight due to the violent protests. Incidents of stone throwing at passing vehicles were also reported. #ProtestAction #sabcnews pic.twitter.com/oagP4bUzlp

Just after 7:00 on Monday, it was reported that the protest action had again flared up near the highway. Although it currently remains open, certain routes towards the N7 have not been so lucky. The relevant Cape Town traffic disruptions include:

Those protesting are either victims of the evictions or have family and friends being turfed out of their homes. One group told Newzroom Afrika that they would “not be going anywhere”.

They vowed to occupy the land for as long as possible – or until a housing agreement has been established with the City of Cape Town, who insist the structures are illegally built.

A truck was torched and a protest started in response to evictions by the city of cape town. pic.twitter.com/AqQmljZLT9