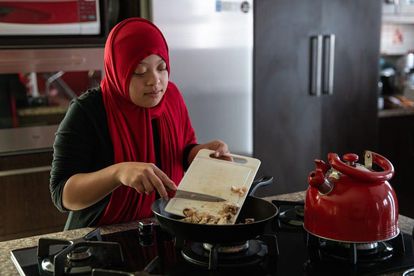 Shumeez Scott, who is an international model and has Down syndrome, makes breakfast for the family at home in Mitchells Plain. Photo: Ashraf Hendricks

Shumeez Scott, who is an international model and has Down syndrome, makes breakfast for the family at home in Mitchells Plain. Photo: Ashraf Hendricks

Nineteen-year-old Shumeez Scott from Cape Town is no ordinary teenager. She is an international model who has Down syndrome.

It is 10:30am in the kitchen of her home in Mitchells Plain, which she shares with her family, and Shumeez is making breakfast. She dumps a mountain of garlic in the frying pan. “Shumeez! That is too much garlic! Are you trying to kill me?” shouts her sister Zhuqeelah. They both chuckle as she scoops out some of the garlic.

Each morning, Shumeez wakes up between 10 and 11am and drifts over to the kitchen to make breakfast – eggs with mushrooms and (a lot) of garlic, or if she’s feeling lazy, porridge.

But Shumeez is no lazy teenager. She holds two beauty pageant titles and a lifetime contract with a modelling academy.

She has always modelled. On her 12th birthday, she strutted through the living room in a dazzling princess dress, posing as her family cheered her on. “That’s Shumeez – eyes always on her,” Zhuqeelah says.

But she never thought she would model professionally. Her career started unexpectedly in April 2017. She was watching Zhuqeelah during her hijab photoshoot. The photographer saw Shumeez sitting there and asked to take photos of her, so Zhuqueelah dressed her up with makeup and clothes. They were both surprised at how natural she was in front of the camera.

A few days later, the photographer called Shumeez’s mother, Bahia Janodien, asking if she could submit the photos to a beauty competition. Shumeez won the competition and the title of National Miss Down Syndrome Ribbons4Roses South Africa 2017.

“I love the camera,” says Shumeez. “But the first time I modelled on the ramp, I was like ‘where’s my mother? Where’s my sister?’ I was so nervous.”

After her success in India, her mother asked Shumeez what her dream was; she said she wanted to be a supermodel and open her own hand massage business.

“I’d never realised that Shumeez has needs of her own,” says her mother. “Always being there to protect her, not realising that she can be independent, and she has dreams like my other two children have. She was saying: ‘I want to live a dream. I have a dream as well, so why can I not live my dream?’’’

Janodien decided to start the Shumeez Scott Foundation to empower people with Down syndrome. The foundation was launched at a fashion show in the Athlone Civic Centre on 4 November. About 30 people with disabilities were in the show and about 350 people were in the crowd.

At the show, Bianca Edwards, Cape Town director of Ace Models, announced that Shumeez had been offered a lifetime contract with the modelling academy. Normally, models at Ace Models only have a year long contract.

“I see her changing the perception of beauty in South Africa and we want to be a part of that,” Edwards told GroundUp. “She has the potential to be the new face of beauty. She is a model for those with disabilities, saying ‘we are beautiful and I’m going to show the world who we are’,” Edwards said.

Shumeez will lead a group of girls with disabilities in August 2019 to Las Vegas to compete for the MWI International 2019.

Life with Down syndrome

Shumeez’s condition was not picked up in ultrasound and after her birth the doctors disagreed over whether or not Shumeez had Down syndrome. Only after a day of tests was it officially confirmed.

Janodien says that at first she asked herself, “Why me?”. Then she accepted that her daughter was different. “I saw it as a blessing coming my way. She was special to everyone. As she grew up, we tried to raise her normally. She must not think that just because her face looks a little different, it makes her different. It’s what’s inside that makes the person,” says Janodien.

At five years old, another child with Down syndrome bit Shumeez’s nose at the Red Cross Children’s hospital. The doctors had to pull the child off of her. She has a scar across her nose.

Then at 11 years old, Shumeez was on the school bus during a national taxi strike when a brick went through the window and hit her in the face. She had two operations on her face and one on her eye. Her eyelid is often partly closed or fluttering because of the injury.

Each day Shumeez does 30 minutes of exercises. On Thursdays she has modeling classes and a few times a month she goes with members of the foundation to give people hand massages. If she isn’t doing that, she’s watching Hannah Montana or listening to Justin Bieber. She loves to cook, play golf, watch Netflix, and talk to her friends from India.

Shumeez said people have started to recognise her. She giggles. “It makes me nervous,” she says.