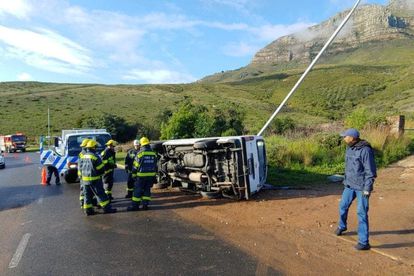 A Cape Town taxi driver fled the scene after the minibus he was driving was involved in an accident on Thursday morning, News24 reports.

The vehicle was loaded with school children and left an eight-year-old boy critically injured, and five other children wounded when it crashed into a streetlight pole.

“The taxi had no permits and, according to Natis, the vehicle was also unroadworthy,”Western Cape traffic chief Kenny Africa is quoted by the publication.

The taxi was found by Traffic and Fire and Rescue Services without its driver, while it lied overturned on the side of the road.

According to Africa, the driver lost control of his vehicle, which overturned with 15 children inside.

The seriously injured boy was taken to the nearby Red Cross War Memorial Children’s Hospital. Nine other children were taken to the District Six Day Hospital where they are being treated for shock.

The crash caused traffic congestion on the road, with the left lane on the incoming side closed to traffic while authorities were on the scene.  This has now since been cleared, and traffic is operating as normal.

The accident happened just over a day after another taxi travelling from Beaufort West to Cape Town crashed in the early hours of Wednesday morning, leaving two small children – a toddler and an infant – dead. As was the case in the latest incident, the driver also fled the scene.

“We are urging motorists, especially taxi drivers, public transport operators, please when you are taking on long distances, make sure you stop after every 200km or after every two hours,” Africa said.