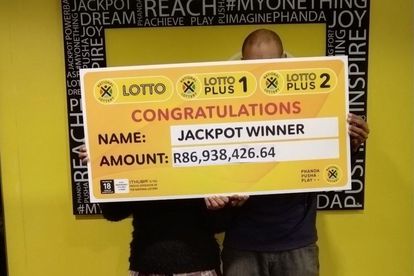 A Cape Town street vendor’s dreams came true after he bagged the massive R86.9 million Lotto jackpot, which was drawn on Saturday, 3 September.

CAPE TOWN MAN INTENDS TO BUILD A HOUSE FOR HIS FAMILY

National Lottery Operator, Ithuba, said the man makes his living as a street vendor and his prayers were answered when he won.

The man reportedly realised he had hit the jackpot on Sunday. He purchased the winning ticket at a Shoprite store in Durbanville, Cape Town, and opted for the manual selection method.

“The first thing we did when I realised I had won, we prayed and thanked the Lord, only my wife and children know that we have won,” said the lucky winner.

The Cape Town man said he plays Lottery games twice a month and usually mixes up his number selections each time he plays. “…this time around I specifically played LOTTO and not the other games, as I went with my gut feeling.” The most the man has won from lottery games before was R450.

“All my life I have always dreamt of winning a big jackpot, and now I can build a house from my family,” said the man.

In his spare time, the man gives motivational talks at schools. He said he will use the time and freedom afforded to him by the substantial cash injection to relax, which is something he could not do before.