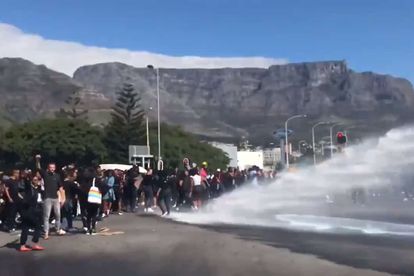 Cape Town police have come out in numbers to prevent protest action aimed at raising awareness about the plight women face in South Africa.

What began as a silent demonstration, led by the Total Shutdown movement, outside the Cape Town International Convention Centre (CTICC), where the World Economic Forum (WEF Africa 2019) is being held, ended in chaos.

Students and women-led civic groups gathered in Cape Town’s central business district to send a clear message to President Cyril Ramaphosa, who, in the midst of the ongoing crisis that’s gripped the country in fear, was playing host to global leaders at the CTICC.

Things soon turned violent after protesters broke through the police barricade in an attempt to gatecrash the WEF Africa 2019 proceedings.

Pepper spray used. Things are getting tense as protesters are demanding to see the president @GroundUp_News #aminextprotest pic.twitter.com/4TFPrG7gV7

From what we have seen online, the police have been moving the crowds away from the CTICC, using water trucks, rubber bullets and stun grenades to disperse crowds.

While the unarmed protesters have not budged, persistently taking the fight back to the armed police, some of them have sustained injuries in the clashes.

Thus far, the numbers have not been tallied up by authorities but according to Ground Up journalists who are on the ground, raising awareness about the events that are unfolding in Cape Town, there has only been one arrest.

Earlier, we reported that the entire area surrounding Parliament, on Plein Street, had been closed off to traffic. The protest activity appears to have moved entirely towards the Foreshore area of the city.

Delays can be expected at the entrance and exit points of the N1 and N2 highway, as crowds have returned to the CTICC to await an address from President Cyril Ramaphosa

From what we understand, the president has not confirmed his appearance. However, it seems unlikely that the crowd will be going anywhere soon until he concludes his business at the WEF Africa 2019.

#WEFAfrica19: the marchers have now entered the vicinity of the CTICC, where they want the president to speak to them. @dailymaverick pic.twitter.com/c3J1dns9IP