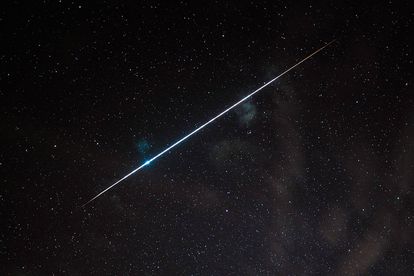 Image, for references purposes only, via Wikimedia Commons

Image, for references purposes only, via Wikimedia Commons

Cape Town locals were treated to a rare astronomical show on Wednesday, when a meteor appeared in the sky shortly after dusk.

Social media was abuzz with reports of a ‘bright light’ encompassing the night sky and it wasn’t just Capetonians who were left startled and perplexed. Shortly after 8:30pm, several reports of a ‘meteorite’ sighting above the Western Cape region began to surface.

From Malmesbury to Hermanus, Cape Town to Ceres – farmers and urbanites all reported the same unusual observations. According to eye witnesses, the meteor was accompanied by ‘a loud bang’, which has been described as sounding like ‘a gas bottle exploding’. Other reports indicate that the meteor rattled houses and windows as it plummeted to earth.

Yes, it really was a meteor

Naturally, social media users debated the phenomenon, with some attempting to debunk the meteor theory. Conspiracy theories spread – with one user even pointing to Denel, South Africa’s weapons manufacturer, as testing a ‘top secret missile’.

The South African National Space Agency (SANSA) confirmed that it had received hundreds of reports. While no official statement has yet been issued by the organisation, Riana Steenekamp, media spokesperson for Overstrand Municipality, says that she has been in contact with SANSA, and that they have indeed verified the event.

It could even be a meteorite

There is a difference between a meteor and meteorite. Meteors are actually quite common – think shooting stars. The term ‘meteor’ describes the flash of light seen in the night sky, when a piece of space debris burns up as it passes through our atmosphere.

If any of that space debris survives its vicious descent though earth’s atmosphere and manages to impact the surface of the earth, it is then called a meteorite.

I heard a loud bang, like a gas bottle exploding, but people saw it….. A flipping meteorite! pic.twitter.com/m4nHeRpLdb

So while Western Cape locals definitely witnessed a meteor entering the earth’s atmosphere, the search for a space rock on South African soil has now begun.

While unconfirmed by SANSA, several wide-eyed, amateur astronomers have diverted attention towards a NASA warning which was issued on 15 January. On Tuesday, NASA listed a warning on its ‘near-Earth objects’ alert page.

Anyone in the #Hermanus or #Onrus area see or hear an explosion that was possibly a #meteorite at around 20h30? #CapeTown pic.twitter.com/UnKBeK5aXS