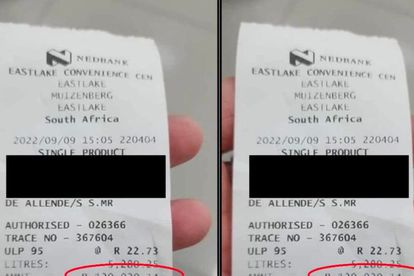 The Cape Town man who made headlines after paying over R120 000 for petrol finally had his money returned to his account. Photo: Sebastian Santino De Allende / Facebook

The Cape Town man who made headlines after paying over R120 000 for petrol finally had his money returned to his account. Photo: Sebastian Santino De Allende / Facebook

Sebastian Santino De Allende went viral online after posting a picture of his fuel receipt showing the hefty amount taken out of his account.

De Allende stated that he asked for a full tank of petrol which costs R1 200 but a total of R120 020.12 was taken from his account instead. The incident occurred at an Engen garage in Cape Town.

Speaking to IOL, De Allende said the manager told him on the day of the incident that a reversal was done and he would be called the following day to check. Three days passed and he still had not received his money nor was he called.

His money was finally returned

Images of De Allende’s receipt went viral on various social media platforms and made headlines across the country.

Using Facebook once more, this time on a positive note, De Allende thanked everyone who shared his post about the incident. His money was finally returned. He added that he deleted the original post due to it going ‘way too viral’.

“Thank you to everyone for sharing the post about Engen. It got their attention and they immediately returned the money. I did delete the post because people were going crazy and I was getting friend requests every 5 seconds, it went way too viral but thank you, all sorted now,” said De Allende.

Previously, it was reported that an Engen customer from the suburbs of Cape Town was left horrified, when he was billed 100 times OVER the amount he should have paid.

Filling his car up with 52 litres of petrol, Sebastian Santino De Allende was expecting to pay R1 200, plus a reasonable tip for the cashier. However, once he reviewed his receipt, the motorist noticed that something had gone dreadfully wrong…

He had actually been left with an eye-watering charge of R120 020.14 – with his per-litre price working out to be R2 273. Even in the current climate, it sticks out like a sore thumb, and Mr. De Allende was compelled to take his grievances to social media. Read the full story here.