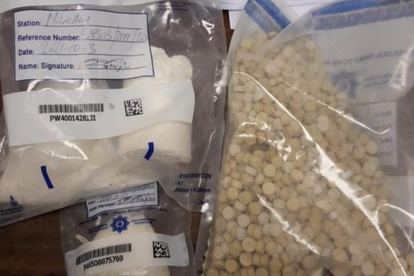 A suspect is in serious hot water after getting snatched with a substantial quantity of drugs in Cape Town on Wednesday 13 October. The 43-year-old man was busted carrying cocaine, crystal meth, and mandrax tablets with a street value of R4.5 million.

With the suspect yet to appear in court, his name remains confidential until a formal charge is laid.

“Continuous efforts to eradicate the illegal drug trade in the Western Cape led to the arrest of a 43-year-old suspect this morning, 13 October 2021 at about 02:30 in Sanddrift,” said police spokesperson Warrant Officers Joseph Swartbooi.

Police were informed drugs will be moved from the up-market Milnerton address before the officers pounced on the right house at the right time.

“Upon their arrival at the address and obtaining permission, the members searched the premises and found a black plastic bag containing cocaine, a transparent bag containing crystal meth and mandrax tablets, nine Camry scales hidden under the bed,” Swartbooi added.

The officers confirmed that the nabbed substances are estimated to be at a street value of R4.5 million. The report concluded to reveal that the suspect will face a drug possession charge at the Cape Town Magistrate’s Court.

In another recent drug bust in Mzansi, police arrested a motorist with R500 000 worth drugs. Dundee police pulled over the motorist while transporting nine 50kg bags of dagga in a trailer to Gauteng.

KwaZulu-Natal SAPS spokesperson Colonel Thembeka Mbele said the police had been conducting the stop and search operation in Karel Landman Street in Dundee. At around 10.30am, they nabbed the motorist with a stash of dagga. The officers spotted the suspicious vehicle and pulled the motorist over to search it.