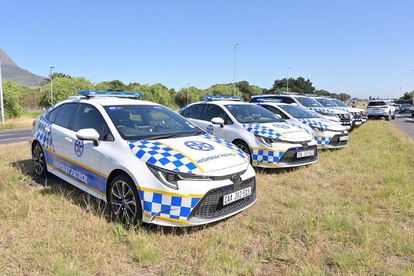 The City of Cape Town revealed that its new Highway Patrol Unit will be equipped with some pretty neat technology.

According to the City, the Highway Patrol Unit will be equipped with Automated Number Plate Recognition (ANPR) dash cameras.

The new unit has a lot of tasks set out

They will be tasked with patrolling the City’s main arterial routes on a 24-hour basis, conducting enforcement and assisting motorists in the emergency lane.

The Highway Patrol Unit will also be conducting visible patrols, enforcing traffic laws and responding to incidents that were detected through the Freeway Management System cameras.

Officers will also be able to assist motorists who break down and manage traffic if needed.

Where needed, the patrol unit will also be able to help with area enforcement and other specialist units such as the Ghost Squad.

What new equipment and technology will the Highway Patrol Unit have?

The City says that vehicles will be fitted with dashcams and Automated Number Plate Recognition (ANPR) technology.

The City of Cape Town explains that the ANPR dashcam technology is powerful and will assist officers with their work.

The technology automatically tracks motorists with outstanding warrants, identifies duplicate/cloned licence plates, alerts officers of stolen vehicles or vehicles that have been involved in criminal acts.

ALSO READ: WTF? A school in Cape Town has been STOLEN – ‘brick-by-brick’

“This unit also signals the first shift to a 24-hour Traffic Service operation in Cape Town. And, the inclusion of technology highlights our focus on innovation in crime fighting, to make our Officers more effective in their work. The activation of this unit is well-timed, as we prepare for the festive season, which requires all hands on deck to ensure a safe and happy time for our residents and visitors alike.’ said Hill-Lewis.

When was the unit established?

According to the City’s Mayoral Committee Member for Safety and Security, Alderman JP Smith, the unit was conceptualised a few years ago but the pandemic delayed its launch.

There are plans to double this capacity in the next financial year.