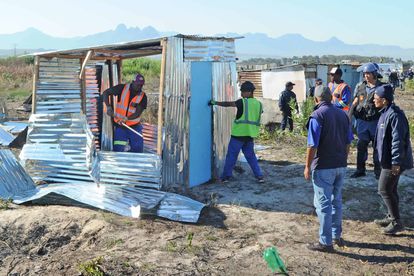 The City of Cape Town intends challenging a ruling by the Western Cape High Court which found that its anti-land-invasion unit (ALIU) had acted unlawfully when it demolished structures and evicted residents.

“As mayor, I have today instructed the City of Cape Town’s legal team to appeal the Western Cape High Court’s order granting an interdict removing the City’s right to protect property from land invasion”, Mayor Dan Plato said in a statement on Wednesday, 26 August 2020.

The South African Human Rights Commission (SAHRC) had approached the courts in the wake of hundreds of city residents being forced out of their homes, under the lockdown. It also came after Bulelani Qolani, a Khayelitsha man, who was violently ejected from his shack by metro police officers. Video footage of the incident went viral on social media, prompting the City to launch an investigation and subsequently suspend the officers involved.

Qolani and activist group Housing Assembly were part of the application.

Under the lockdown, eviction orders need to be enforced by the courts, but only when regulations allow them to do so. The City stood firm on the matter, arguing in part, that some of the dwellings were erected even after the nationwide shutdown was implemented.

The mayor insists that the City’s actions, which have drawn the ire of civil rights groups and even national government, are necessary and vital for upholding the rule of law. Plato further said they expect more people would be taking advantage following the decision.

“The granting of an interdict preventing the City from conducting any counter-spoliation to protect public land without a court order goes far beyond what the Constitution and the Prevention of Illegal Eviction from and Unlawful Occupation of Land (PIE) Act allow”, he added.

He said it sets a dangerous precedent for all landowners and if left unchallenged, would make it almost impossible for landowners to protect their property from unlawful occupation.

Plato said months into the lockdown, the city has managed to remove more than 55 000 illegal structures in around 30 different parts of the metro.

“The impact of this on all municipalities and our country as a whole will be substantial. All other metros, and indeed all landowners nationally, are affected”

In another blow to the City of Cape Town, the court ordered it to return  all building material and personal possessions that were taken during the raids from 1 May 2020 and that it pay as much as R2 000 to the claimants.

“Compensation for loss of personal possessions in the sum of R2 000 per person would be fair in all circumstances. A list of names of affected persons must be provided to the City”, the judgement read.