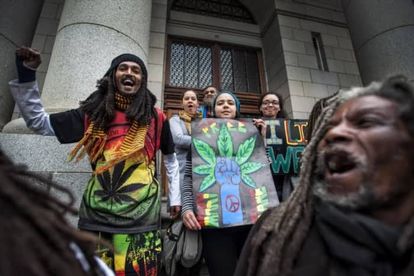 “We beg this court to be bold. To be brave,” Rastafarian and law graduate Garreth Prince pleaded. He is bringing the application with Dagga Party leader Jeremy Acton.

In the opposing benches are State advocates Bogoshi Bokwana and Sipokazi Poswa-Lerotholi, fresh from their victory at the Supreme Court of Appeal, where the government won its application to overturn the right to euthanasia decision.

Surrounded by files and copies of the more than 4000 pages of evidence submitted by Acton and Prince, the battle is over sections of the Criminal Prohibition of Dagga Act, read with certain sections of Part III of Schedule 2 of the Drugs Trafficking Act and the Medicines and Related Substances Act. Prince and Acton want this to be declared unconstitutional.

According to Prince and Acton, and the 18 people joined to the case over pending dagga prosecutions, the sections of these laws unjustly and unfairly infringe on their Constitutional right to use the herb for recreational, spiritual, medicinal, health, or economic purposes.

Prince said they are tired of being racially profiled, discriminated against, searched without a warrant, and arrested over a personal or cultural choice.

“If somebody commits rape or murder, then arrest them. But cannabis?” asked Prince, who has argued that the money dspent on policing its use and jailing people could be put to far better use.

“Someone needs to tell them they must wake up and smell the herbs,” said Prince, to stifled giggles from the judges and the public gallery.

To make matters worse, said Acton, the law which prohibits dagga is not even the work of a democratic government, but a racist relic from a puppet government established by the British crown in the 1920s.

Both are representing themselves. Although Prince is a qualified lawyer, he is not allowed to practise because of a dagga-related conviction in 1989, when he was a law student. He was arrested again in 2014 for allegedly having a dagga bush in his garden. He, Acton and the 18 others have secured a stay of prosecution pending the outcome of this case.

Prince believes it is the State that is committing the crime, by criminalising adults like himself over a personal choice, and without scientific evidence that it causes widespread harm. He said tobacco and alcohol causes more harm than cannabis, but can be freely used.

For Acton it is not only about being able to smoke a joint while watching rugby with friends, in the same way they are allowed to drink alcohol and smoke cigarettes. It also has to do with the right to unleash what he believes is a great untapped potential for economic wealth. With a hemp brick and cannabis products in packaging that resembles products sold at Clicks and Dischem, he told the judges it was a shame that these products are illegal in South Africa. They have to be imported, depriving South Africans of an opportunity to create their own industry in the products.

Neither have any problem with some form of regulation, such as the State testing people if its use is linked to a crime, in the same way suspected drunk drivers have to have their blood/alcohol levels tested.

A duty to protect

However, the State insists it has a duty to protect people from harm, and is doing nothing wrong by invoking the section of the Constitution that limits rights.

“We submit that the State has an interest in protecting its citizens, including children, against harm caused by narcotics, including cannabis,” said Bokaba.

He was arguing on behalf of the ministries of health, police, trade and industry, and justice and constitutional development, and the director of public prosecutions (DPP), who oppose the application.

The State is committed to international treaties to prevent the use and trafficking of narcotic drugs, said Bokaba. He quoted from Prince’s previous Constitutional Court judgment which said South Africa is one of the biggest international suppliers of cannabis.

The State is worried about the way dagga is combined with other drugs like tik, with devastating effects.

Friend of the court, advocate Ron Paschke, countered this. His role is to give the judges additional information that might help them make a decision. He said that according to the DPP’s own statistics, 81.4% of drug-related prosecutions in Limpopo were for cannabis use alone.

Bokaba submitted that Prince and Acton feel that “every right under the sun” is being violated, but did not formulate an argument to back this up.

Davis jumped in and said Prince and Action are not lawyers and should not have to go through a forensic test of their submissions. It should be left up to the judges to decide whether their submissions and evidence are strong enough.

The judges turned the tables on the State and, in an uncomfortable exchange, demanded to know where its supplementary affidavits were to dispute the evidence provided by the other side.

The judges are expected to say later whether the more than 4000 pages of evidence will be accepted.

Judgment was reserved for the judges to think about it, and write up their ruling. This is expected to be handed down next year.

The Rastafarians and supporters in the public gallery posed for pictures with Acton and Prince. Many shook their hands and thanked them.

Prince went to Poswa-Lerotholi and gave her a hug to clear the air.

In March next year, a similar case is expected to be heard in the High Court in Pretoria, when the “dagga couple” bring a similar challenge after their appearance in the Krugersdorp Magistrate’s Court on dagga-related charges.

The Medical Innovations Bill is currently going through parliamentary processes, and if passed, would lay the foundation for the medical use of dagga.