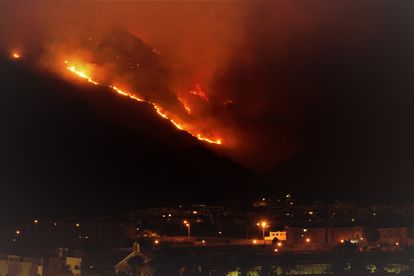 The Cape Town fires continued to spread overnight, aided by gravely timed south-easter winds in the Mother City. The raging flames have now become a threat to the Vredehoek community, and a number of suburbs have been evacuated. Meanwhile, senior police officials have confirmed that a man has been arrested on suspicion of arson.

What areas of Cape Town have been evacuated?

The developments on Monday morning come in the wake of untold destruction. Although there has been no loss of life from this all-consuming blaze – a testament to the work done by firefighting teams so far – local landmarks, iconic venues, and vast patches of vegetation have been scorched. The fire was started just after 11:00 yesterday.

“These Cape Town fires have now spread towards the Vredehoek area as a result of the South Easter. The wind speed increased from about 2:00 this morning and additional fire crews are now stationed at Pepper Tree and Chelmsford area. As a precautionary measure, these areas were evacuated.”

“Further crews are on Tafelberg road as the wind speed is predicted to increase throughout the morning. This could also potentially impact on the deployment of aerial firefighting support this morning. More than 250 firefighters from the City, TMNP, Working on Fire, and the Volunteer Wildfire Services remain on the ground.” | City of Cape Town

Precautionary evacuations have gotten underway in Peppertree Road in Vredehoek, after the fire spread towards the area overnight.#CTNews #CapeTownFires #CapeFire pic.twitter.com/JYUyAnoYHX

Cape Town fires: Who is the arson suspect?

SAPS Western Cape Spokesperson Andre Traut lifted the lid on the arson arrest made on Sunday evening. It’s believed that three men could have been involved in starting the Cape Town fires, according to a local Neighbourhood Watch group.

“In response to your enquiry kindly be advised that a 35 year old male was arrested last night at 20:10 in Philip Kgosana Drive Cape Town by a member of the City’s Law Enforcement on a charge of arson.”

“It is alleged that a member of the local neighbourhood watch witnessed three suspects making a fire on the mountain, and alerted authorities. Two of the suspects managed to evade arrest. The circumstances surrounding the case are being investigated and an appearance in court is yet to be scheduled.”