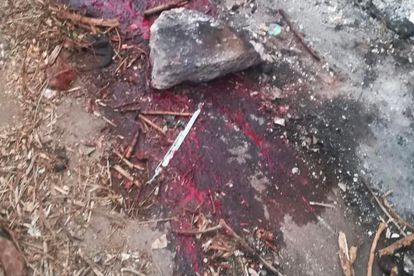 A man’s body who is believed to have been bludgeoned in Canelands, KZN. was

A man’s body who is believed to have been bludgeoned in Canelands, KZN. was

The body of a man who is believed to have been bludgeoned to death was discovered on Alex Bean Road in Canelands in KwaZulu-Natal (KZN) on Friday morning.

The man’s body was reportedly discovered by a passerby.

MAN BLUDGEONED TO DEATH IN KZN

According to private security, Reaction Unit South Africa (RUSA), a passerby contacted them at 06:38 after he made the discovery.

RUSA spokesperson, Prem Balram said Reaction Officers were dispatched to the scene and on arrival found an unidentified male lying in a prone position. He was dressed in his underwear.

Balram said upon examination he was found to have suffered severe head trauma which resulted in his demise.

“A bloodied rock was located next to his body which was in a state of rigour mortis. The deceased is believed to have been bludgeoned to death. The motive for the murder was not immediately established.”

In a separate incident, a body of an unidentified man who was bludgeoned and stabbed at least forty times was discovered in overgrown vegetation on an unpaved road next to a river in Oakford also in KZN.