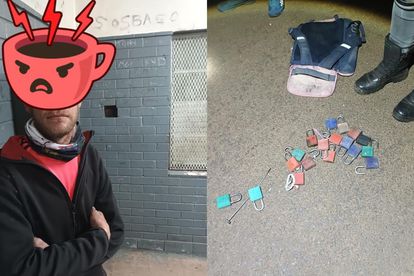 A single cable thief was busted by the Tswhane Metro Police Department (TMPD) while stealing locks from an electricity box.

AMOUNT OF LOCKS FOUND WITH THE CABLE THIEF

“One person was arrested in Booysens by the Tshwane Metro Police Department (TMPD) Cable Theft Unit team on Tuesday, 19 July 2022.

He was found stealing locks from an electricity box and tampering with electricity,” the statement read.

The cable thief was found with 18 locks in his possession, including a key that is only used by the Energy and Electricity Department.

“He was arrested for possession of stolen locks and tampering with essential infrastructure,” said TMPD.

HOW TO REPORT CABLE THEFT IN TSHWANE

Alternatively walk in at the client service centre at the SANAB Building, on corner Frederika and Johan Heyns Street, Gezina.

All information reported will be treated with confidentiality, TMPD promised.

In a non-related matter, TMPD also arrested a suspect for trespassing at their offices.

“The other suspect was arrested by TMPD regional members in Mabopane.

The members responded to a complaint from community members about a suspect who was seen jumping over the wall at the TMPD offices,” the statement read.

“Previous incidences had been reported about people breaking into the office pound and stealing vehicle parts.

TMPD explained that the suspect was found with car breaking equipment and could not account as to why he was on the premises.

“He was then arrested for trespassing and possession of car breaking equipment. Well done to the teams involved,” TMPD said.