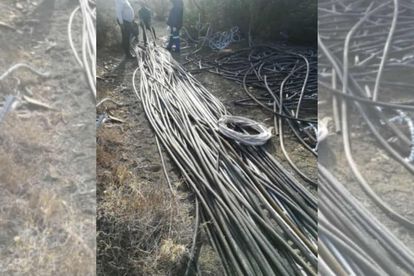 “Efforts to eradicate copper cable theft which leads to the destruction of valuable railway infrastructure yielded yet again excellent results,” police said in a statement.

Vigilant police members were on patrol on the N1 on Friday 26 June 2020 at about 2:00 when they spotted a black Toyota Avanza parked next to the road.

Upon approaching the vehicle, the driver informed them that it had mechanical problems. The members continued with their patrols and later returned to the same area when they discovered that the vehicle was moved. Later, the members spotted the vehicle along the N1 where four men boarded the vehicle and sped off.

“A chase ensued after which the members brought the vehicle to a halt just outside Laingsburg. Upon searching the vehicle the members found cutting equipment that led to the find of bundles of copper cables along the railway line,” said Sergeant Christopher Spies.

“Subsequently, the driver and five occupants of the vehicle were arrested and they are facing charges relating to damaging of infrastructure as well as cable theft,” added spies.

The six suspects appeared in the Laingsburg Magistrate’s Court on Monday 29 June 2020. The suspects, aged between 26 and 39 from De Doorns in the Western Cape, were remanded in custody and the matter was postponed to 6 July 2020 for bail information.

In a separate incident, Laingsburg police recovered copper cables worth an estimated street value of R80 000. The discovery was made after security guards alerted police about a group loitering near the Vleifontein sub-station on Sunday 28 June 2020 at about 13:00.

“Upon discovering the copper cable the suspects already fled the scene of the crime,” said Spies.

“Investigation into this matter is at an early stage and we appeal to the public to come forward with any information that could assist the police to bring the perpetrators to book,” he added.

Anyone with information is urged to contact the investigation officer Sergeant Heinrich Grootboom at the Laingsburg Detectives at 023-551-8040 or Crime Stop at 08600 10111.

The investigation in both cases continues.