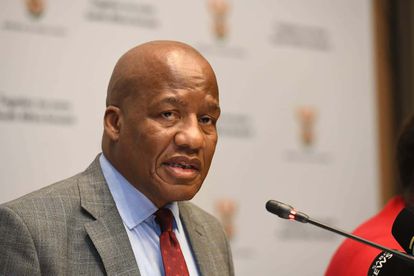 Minister in the Presidency Jackson Mthembu briefing members of the media on the outcomes of the Cabinet meeting. Photo: Jairus Mmutle / GCIS

Minister in the Presidency Jackson Mthembu briefing members of the media on the outcomes of the Cabinet meeting. Photo: Jairus Mmutle / GCIS

The Cabinet of South Africa’s government has called on members of the public to engage the National Health Insurance Bill (NHI Bill), which is currently before Parliament.

The bill was released earlier this month by Parliament, paving the way for public participation and engagement on it.

“Once it is passed into law, the bill will give effect to universal access to healthcare to all citizens in our country, irrespective of their socio-economic background. This right is enshrined in the Constitution of the Republic of South Africa,” Minister in the Presidency Jackson Mthembu said.

He was on Thursday briefing members of media on the outcomes of the Cabinet meeting that was held on Wednesday in Cape Town.

“Cabinet remains confident that the National Health Insurance will be implemented in a phased and responsible manner. An implementation plan will be developed and published once the bill is passed into law,” Mthembu said.

Objectives of the NHI Bill

The bill was signed off by Health Minister Dr. Zweli Mkhize and adopted by Cabinet in July.

Through the NHI, government seeks to fulfill its constitutional obligation to provide quality universal health care for all, as envisaged in Section 27 of the Constitution and the United Nations Sustainable Development Goals.

The NHI aims to follow in the footsteps of countries such as Britain and Japan, which have also implemented their own equivalent.

Under the bill, medical aid schemes will gradually be phased out until they, as the main source of primary health care, ultimately cease to exist.

Cabinet has approved for the publication of the Housing Consumer Protection Bill of 2019 in the Government Gazette for public comment.

The Bill also creates an enabling environment for new entrants into the homebuilding industry by introducing contractual provisions that ensure their sustainability in the market.

“Subsidy and social housing projects now fall within the ambit of the Bill, to ensure the protection of consumers in that segment of the housing market,” he said.

Cabinet has also approved for the submission of the India, Brazil and South Africa (IBSA) Fund for the Alleviation of Poverty and Hunger (IBSA Fund Agreement) to Parliament for ratification.

The Minister said the IBSA Fund was created in 2004 to pioneer impact-driven and people-centred efforts for the promotion of South-South Cooperation.

“The fund has enabled South Africa to contribute meaningfully and substantively towards international efforts to alleviate extreme poverty and hunger in developing countries.

“It has also contributed successfully in promoting all the 17 SDGs in approximately twenty-one (21) partner countries,” he said.