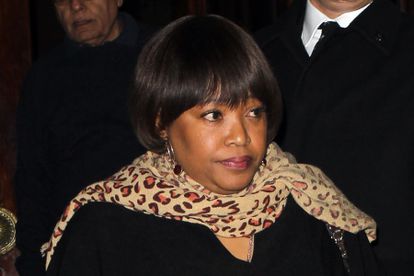 As tributes continued to flood in for Zindzi Mandela, the founder and President Emeritus of Inkatha Freedom Party (IFP), Chief Mangosuthu Buthelezi, has added his voice to the growing chorus of condolences.

Zindzi, 59, the youngest daughter of the late struggle icons, former president Nelson Mandela and Winnie Madikizela-Mandela, died on Monday morning after a short illness, according to reports.

ZINDZI MANDELA SERVED AS AMBASSADOR FROM 2015

She served as South Africa’s ambassador to Denmark at the time of her death, a post she had served in since 2015.

Buthelezi, who closely worked with Zindzi’s father, Mandela when the ANC youth league was formed in the 1940s said her death was a “terrible shock.”

Buthelezi later defected to form his party, the IFP in 1975.

“On behalf of my family and on behalf of the IFP, I send sincere condolences to the Mandela family and particularly to her children. It is difficult to believe that someone so full of life and energy is no longer with us,” said Buthelezi, in a statement released on Monday, 13 July.

Buthelezi said as a close friend of her late parents, he had known Zindzi all her life.

“I have the greatest respect for the choice she made to serve our country. She honoured the legacy of our first democratic president (Nelson Mandela) and continued the legacy of the mother of our nation. Yet she was an individual and a leader in her own right,” said Buthelezi.

He described Zindzi as someone with tenacity and good spirit.

“Zindziswa endured tremendous heartache in her childhood, being separated from her father and often also from her mother. Yet she grew up to have a fierce love of country, where she could so easily have harboured hatred,” added Buthelezi.

He said it was painful that he will not be able to mourn Zindzi’s death properly, as the restrictions of a global pandemic prevented the kind of funeral that would be fitting to her.

“In this strange time, Zindziswa’s own words echo in my heart. Considering the pain of loss, she wrote – ‘I need a neighbour who will live a teardrop away, who will open up when I knock late at night’”

Buthelezi concluded by saying: “Our prayers are with her excellency Princess Zenani Mandela-Dlamini, and with the entire family. We pray that they will be strengthened by the outpouring of support and condolences.”

BUTHELEZI JOINS RAMAPHOSA IN PAYING TRIBUTES TO THE MANDELA FAMILY

Buthelezi joins the throngs of people who have comforted the family including President Cyril Ramaphosa.

In a statement released on Monday, 13 July, Ramaphosa said: “Our sadness is compounded by this loss being visited upon us just days before the world marks the birthday of the great Nelson Mandela.”

Mandela’s birthday is on 18 July, and the entire month of July is dedicated to festivities in honour of the first democratically elected president.