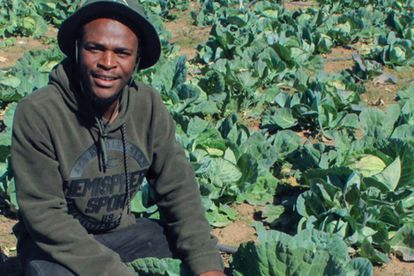 He encourages young people, especially in rural areas, to start farming now so that they can grow up learning the tricks of running a successful farm.

“Because jobs are scarce and the economy is currently not favourable, creating opportunities through farming instead of looking for a job makes sense. This will help us fight poverty and unemployment in our communities,” he says.

Mahlangu is part of the Emrangeni Cooperative, which is a family business in Sokhulumi near Bronkhorstspruit in Gauteng. It has six members, three of whom are below the age of 35. At the moment, the cooperative is focused on crop production, but it hopes to expand its livestock operations.

The cooperative was established almost 10 years ago when Mahlangu’s father approached the tribal authority and asked for a piece of land to start farming.

He says his family bought about three hectares of land and in 2014, started fencing the farm. He says they only started working the land two years ago.

Mahlangu realised his passion for farming while growing up in nearby Wolvenkop, where he would tag along with his late grandfather, who was a farmer.

“The first time I was allowed to get on a tractor, I was so excited. I found it to be an interesting vehicle. Unfortunately, my grandfather passed away when I was still young,” he says.

After matric, Mahlangu enrolled for a National Diploma in Crop Production at the Tshwane University of Technology. While he is still in the process of completing his qualification, he says his education has only increased his passion for farming.

“This year, we started by planting spinach and in February, we planted cabbage on half a hectare, which is now ready for harvesting. We also planted sunflowers to produce feed for our chickens. Next season, we will plant watermelons, spinach and other vegetables,” he says.

The cooperative has so far created an additional two jobs.

“Our plan is to also build a chicken house and a pigsty. We will then be able to create more jobs. At the moment, we have 20 goats and 10 cattle. The chickens that we currently have are not for sale,” he says.

The cooperative falls under Sokhulumi Agri-village, which is part of the Department of Agriculture, Land Reform and Rural Development (DALRRD) Agri-parks Programme.

This programme aims to address social and economic inequalities, unemployment and poverty within South African communities by empowering and supporting small-scale farmers and emerging commercial farmers.

Mahlangu says the donation is going to help increase production. “Some of our produce did not grow to our satisfaction due to a lack of fertiliser, insecticides and other chemicals. This challenge has now been addressed, thanks to the DALRRD,” he says.

The cooperative sells its products to local markets across Bronkhorstspruit.

ALSO READ: WHY SA MAY HAVE TO FORK OUT BILLIONS TO ZIMBABWE’S WHITE FARMERS

The South African Quote of the Day – Athol Fugard