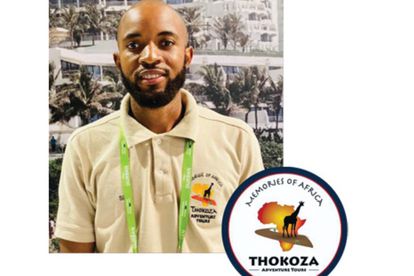 Despite the recent heavy rains in KwaZulu-Natal causing widespread damage, a young entrepreneur is urging people not to give up on their dreams of running their own businesses.

Born and bred in Pietermaritzburg, Siyabonga Kheswa (29) is the founder of Thokoza Adventure Tours, a tour operator formed in 2017.

The floods, which led to over 400 deaths and the loss of livelihoods, badly affected Kheswa’s three-person business.

He says tourism was taking off again after COVID-19 and they had created different tour packages and started a new marketing campaign. Many inquiries were received, he says, but then the floods happened and people did not finalise their bookings.

The company organises tourism experiences, including the booking of accommodation, activities and shuttle transfers, among others.

Thokoza Adventure Tours also takes groups of students on educational excursions. For high school pupils, the company offers activities like quad biking and camping. University students get involved in conservation initiatives, such as the tracking of animals.

Kheswa, who holds an Honours degree in Eco-Tourism Management, says he loved nature from a young age. “I had to do a six-month internship as part of my degree and I did it at a nature training school in Zululand. That is when I went to a game reserve. It was a feeling of awe, seeing a lion for the first time in the wild,” he says, adding that not many black children are exposed to nature and conservation.

As South Africa marks Youth Month, Kheswa, who is currently studying for a Master of Commerce in Tourism Management through the University of South Africa, urges young business people to honour the spirit of the youth of 1976 by not giving up on the fight to gain economic freedom.

“One of the key lessons I have learnt is that you need to be patient. Your business is not going to boom overnight. You must invest time into it and keep on keeping on; eventually, your business is bound to succeed,” he says.